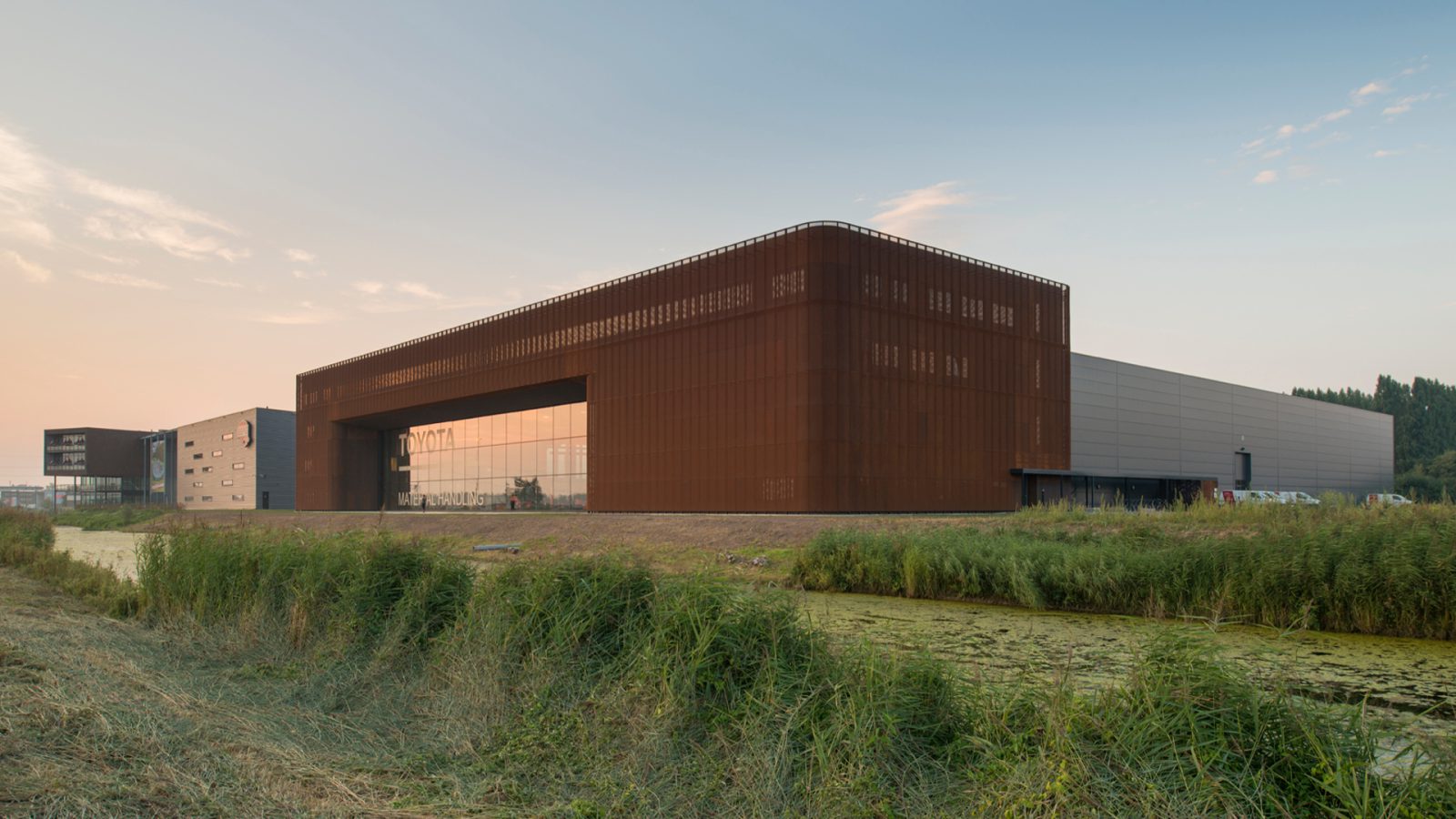 Highway A12, Ede The Kingdom of Saudi Arabia

The business development on the north side of the A12 at the Maanderbroek purchase point in Ede acts as a noise-shielding facility for the residential area behind it. The head office building or a showroom must be oriented towards the A12, of which the side parallel to the A12 must be 85% built up with a height between 15 and 18 meters.

Toyota Material Handling recently established itself in this business park in a new building designed by Rempt van der Donk Architects. On the south side, both the offices and the industrial hall are oriented towards the A12. The building is accessed from the north side via the main entrance. This is also where the necessary parking spaces are located, which are out of sight.

The general picture along the Dutch highways for business areas is a combination of office and industrial hall. The architect consciously did not want to aspire to this image in the new office with industrial hall for Toyota Material Handling Netherlands, Ede. He strives for an image that manifests itself as a unity and in which the distinction between office and industrial hall, on the side of the A12, is concealed behind a veil of expanded metal in Corten-steel. Rempt van der Donk Architecten initiated the Corten-steel facade because of the architectural wish that the building will form a unity and distinguish itself from all similar buildings along the Dutch highways. It is the client’s wish to regard the industrial hall and office space as one whole. “In addition, the reddish-brown discoloration fits nicely into the image quality plan of the municipality for the business park.

A large window has been placed in this Corten-steel veil, which gives a view of the housed organization from the highway. This window is powered by a setback with a depth of 5 meters. The architecture of this building along the highway is therefore simple, clear and unambiguous. The expanded metal facade is drawn around the building like a skin at 60cm from a simple architectural facade. This space is also a service strip. To reinforce this image, the building corners have been designed round. One physical property of expanded metal in facade applications is that the building appears closed from the exterior, while the environment remains clearly visible from the interior. Due to the use of expanded metal, no additional sun protection is necessary and ensures that there is no heat load in clear weather. Maintenance on this facade is not necessary. Corten-steel is maintenance-free. The appearance is industrial due to the use of materials and is in line with the image that the client is striving for.

The internal structure of the property is open and dynamic. In the building, the central staircase and the main entrance establish a direct relationship between the work floor in the industrial hall and the office. The atmosphere in the offices is clear, transparent and warm due to the unambiguous material applications. The walls and the subtly detailed flat system ceiling with large plates are white. The floor, the furnishings, the bamboo on the floors and the primary bright colors on some walls and meeting places give the office floors a homely atmosphere. The central stairwell has prefab concrete steps clad in stainless steel and underlines the industrial character of the building. The restaurant and the open office garden on the third floor are located on a large roof garden with an outdoor terrace that is shielded from the large roof of the industrial hall by an expanded metal facade screen.

Many sustainability measures have been taken in the building, both architecturally and technically. In addition to a solar park for generating electricity, which will charge the batteries of the forklifts, the building is heated and cooled by a heat pump. This pump is controlled in anticipation from Japan. The building is certified under class “A”. The building is in line with Toyota Material Handling’s principle of sustainable entrepreneurship. . However, TMHNL also requires a sustainable and economic return from the new construction from which the forklift truck fleet is managed and maintained and the forklift trucks are rented out. On the ground floor in the extension is also an experience center designed with grandstand. 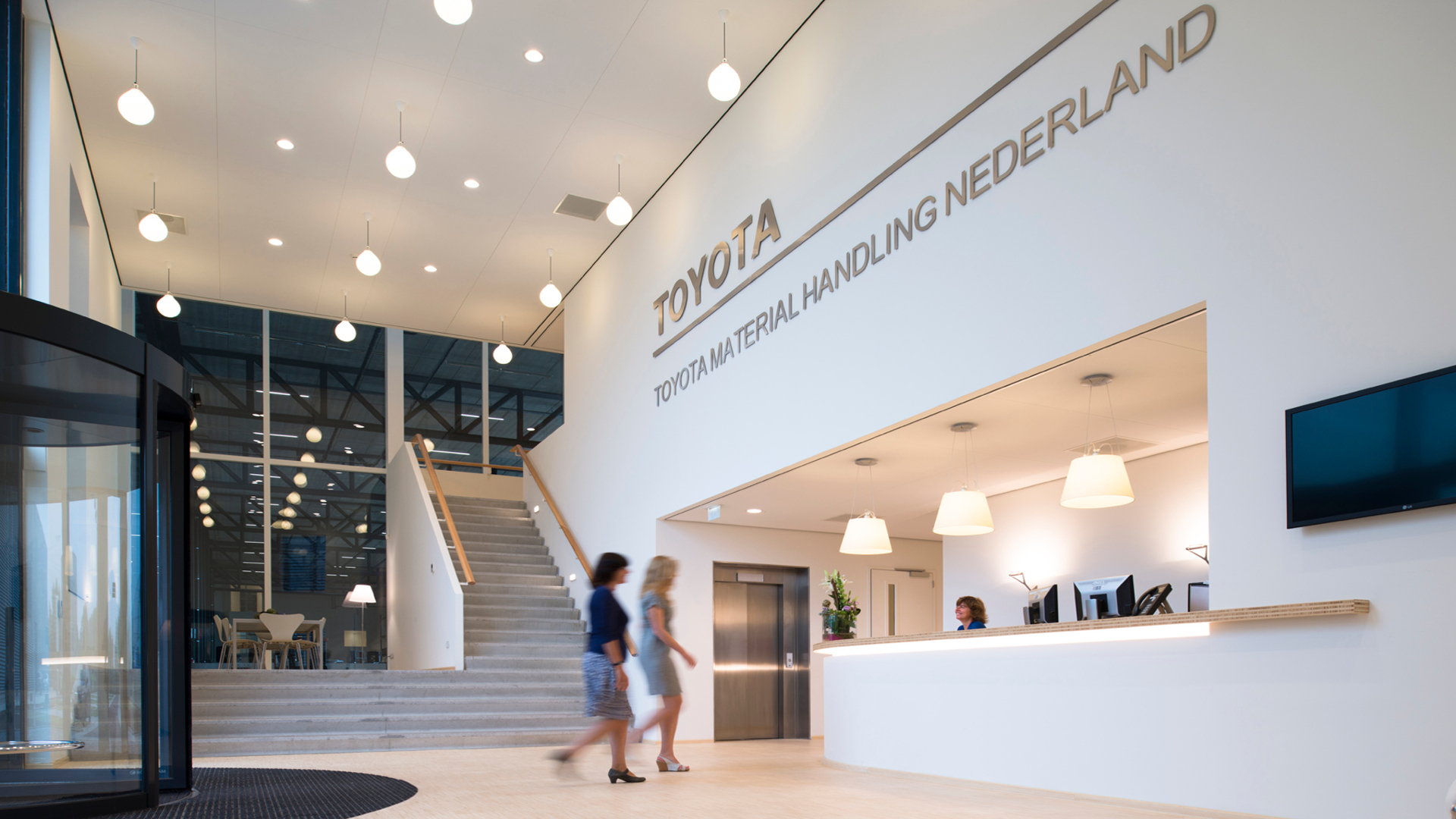 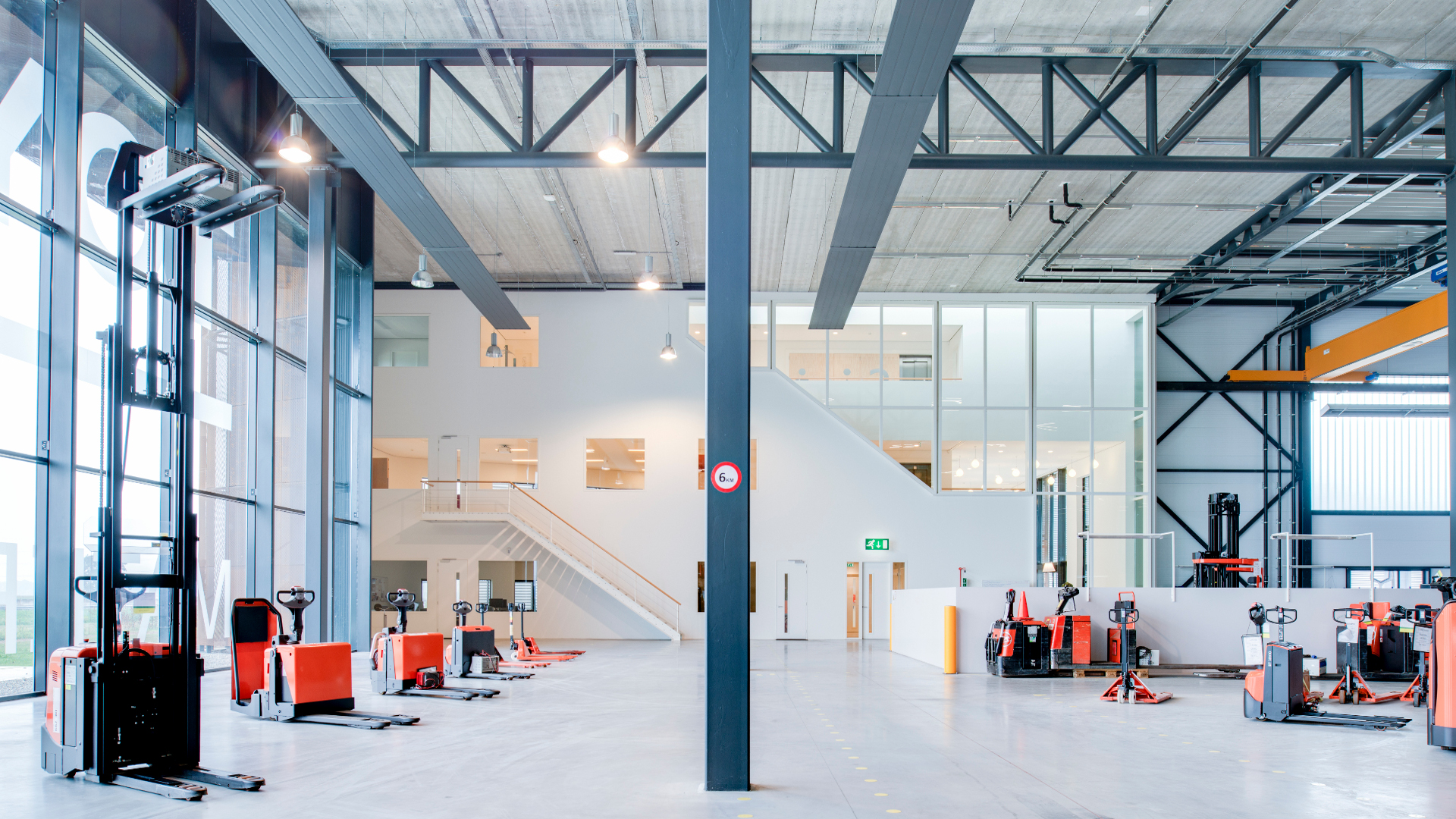 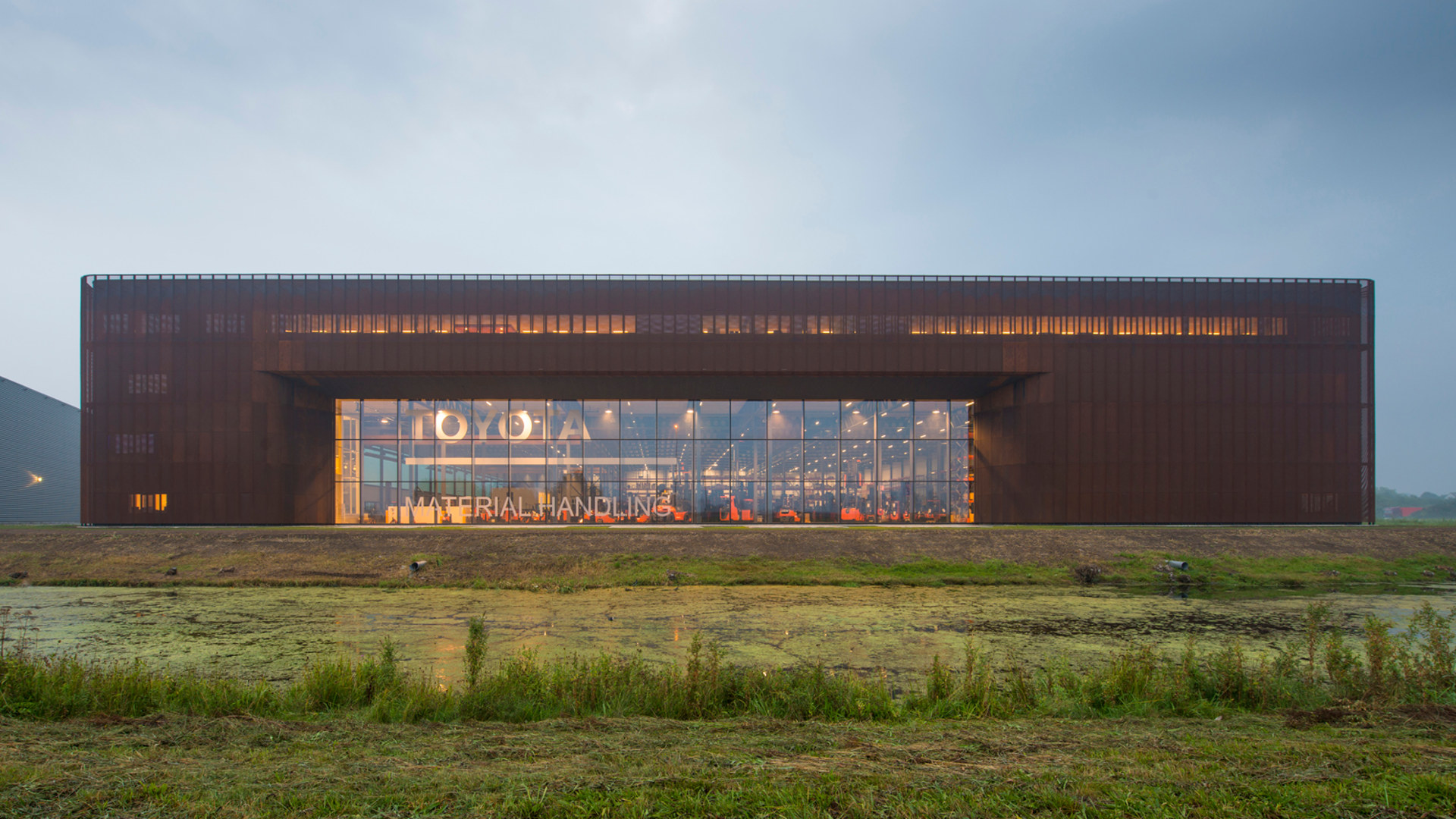 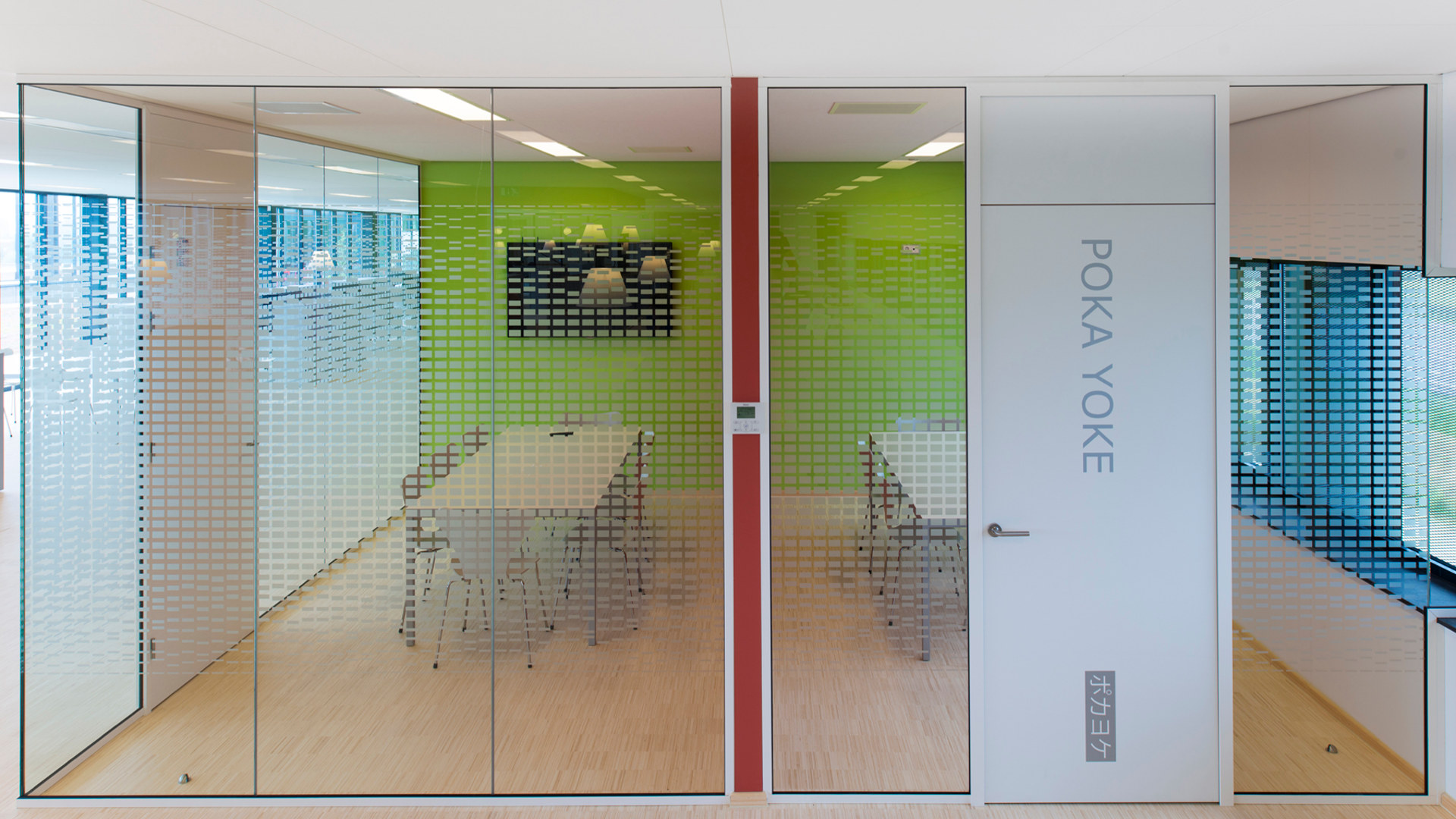 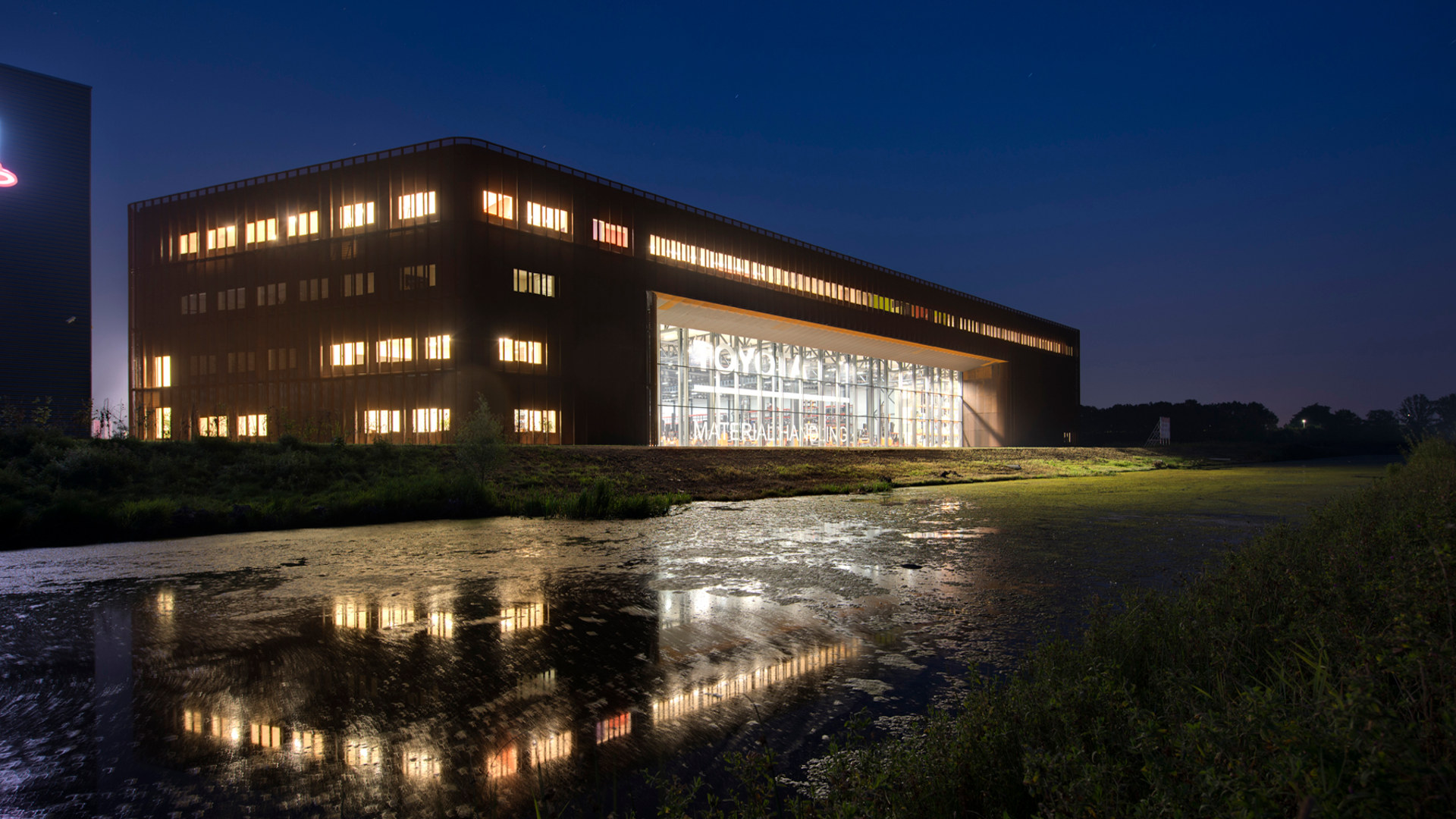 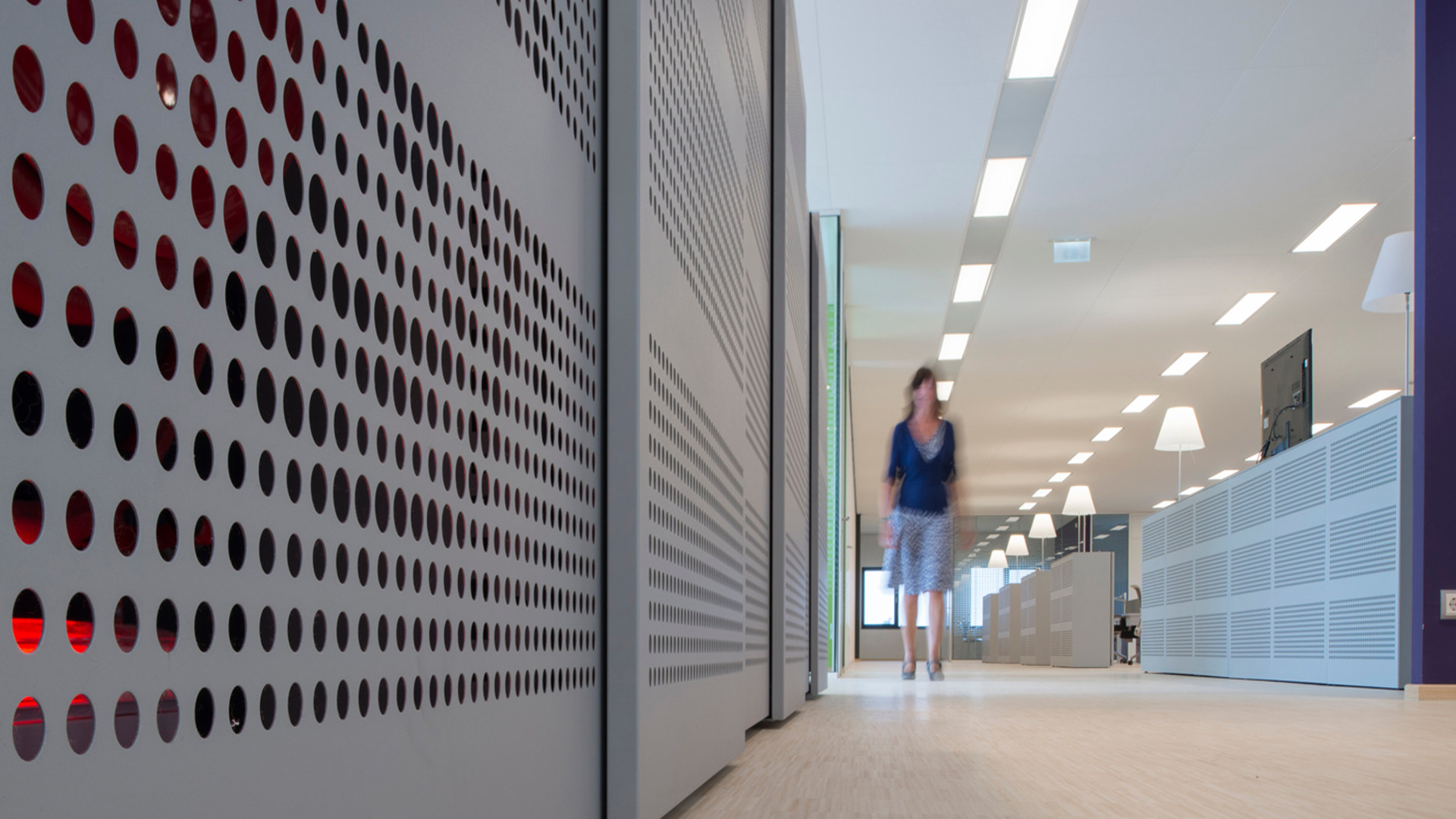 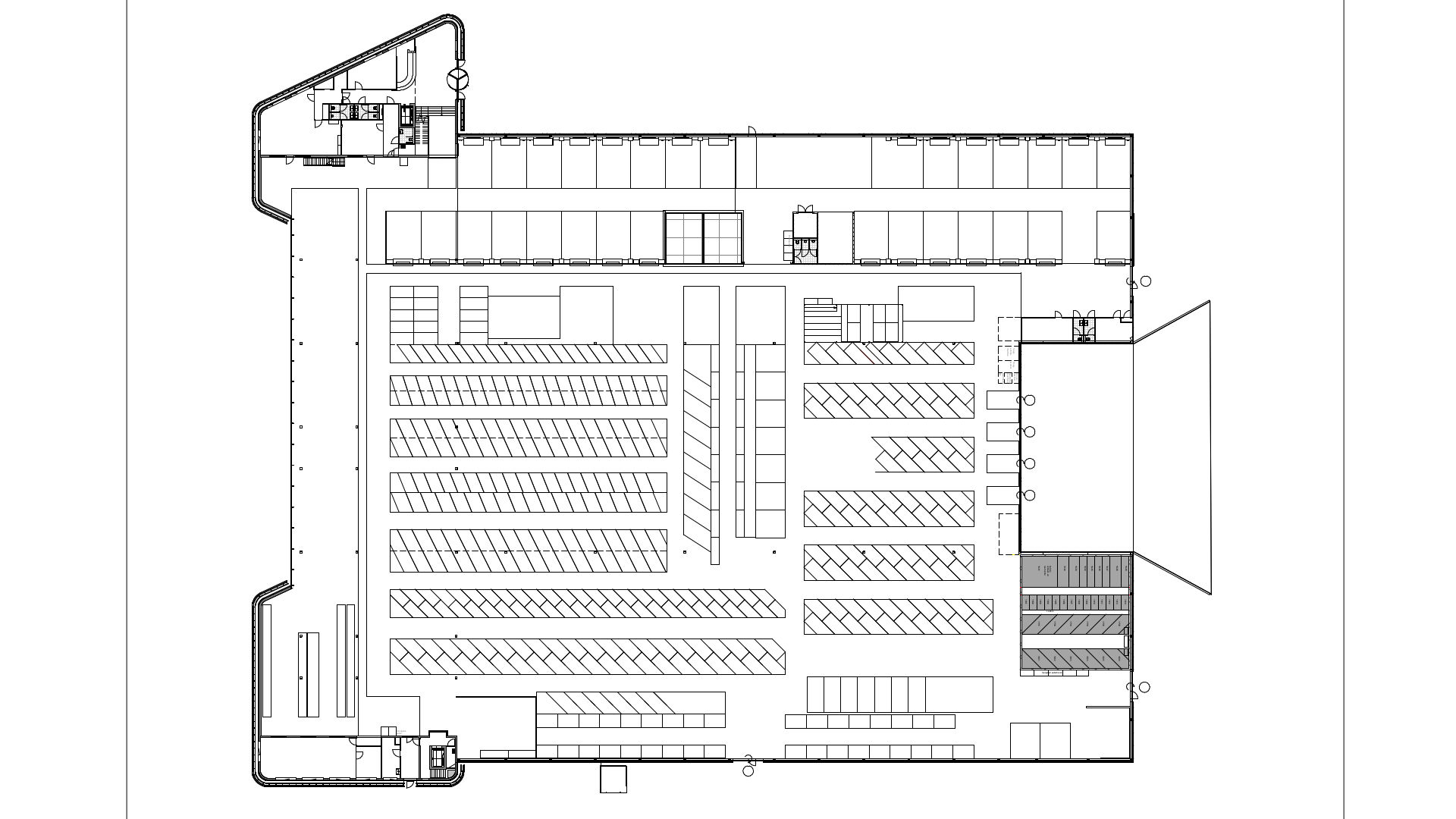 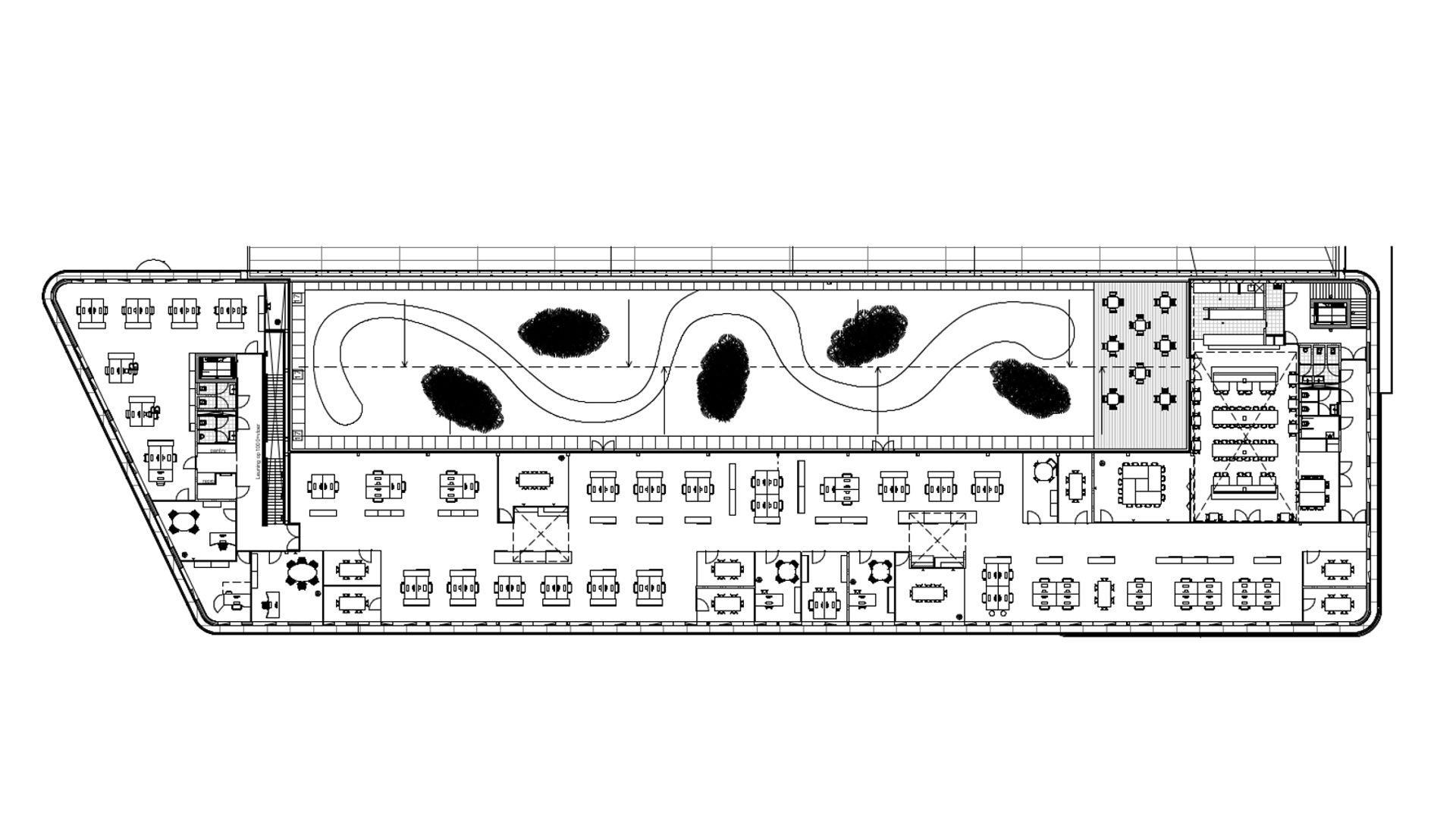 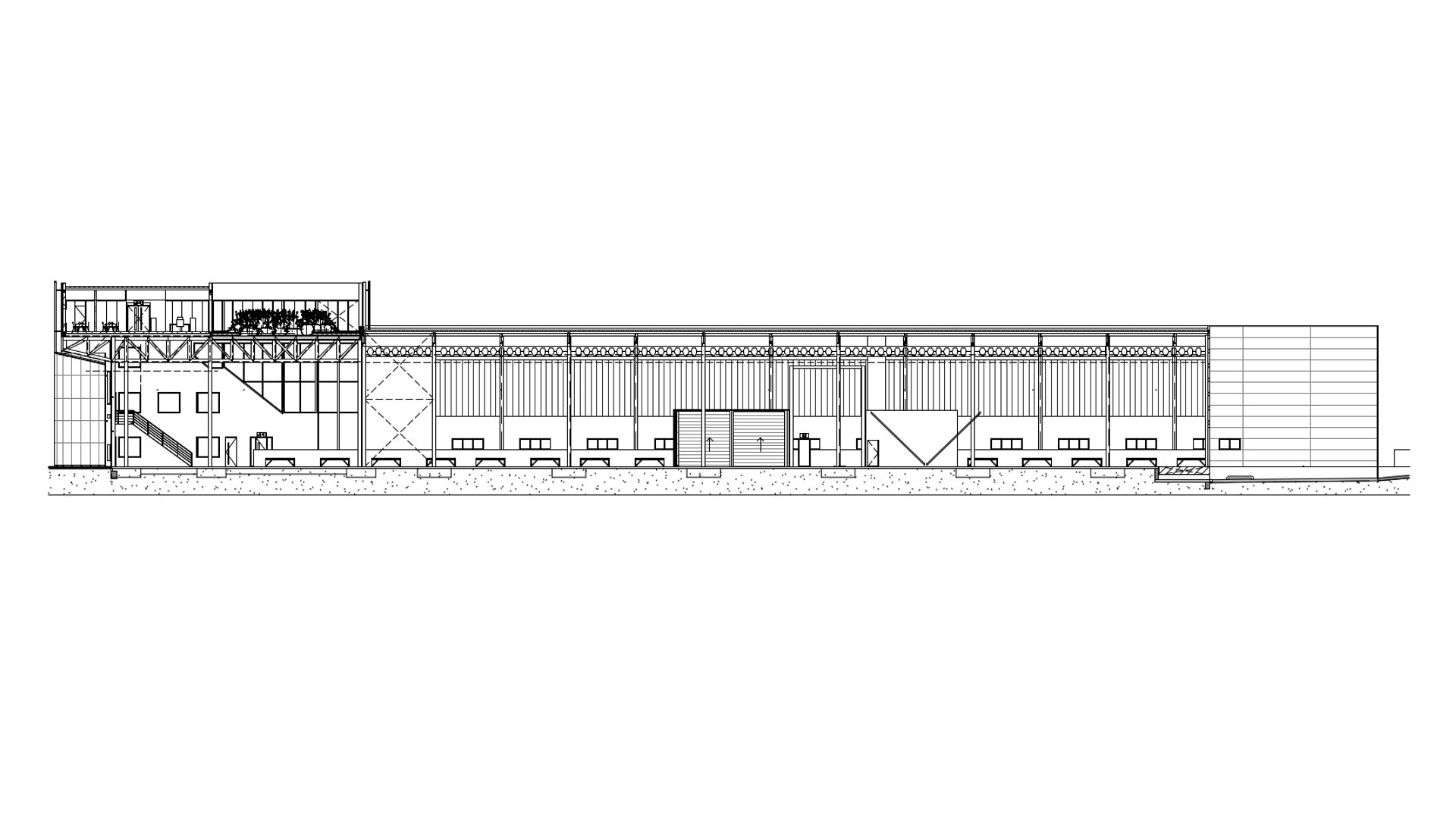