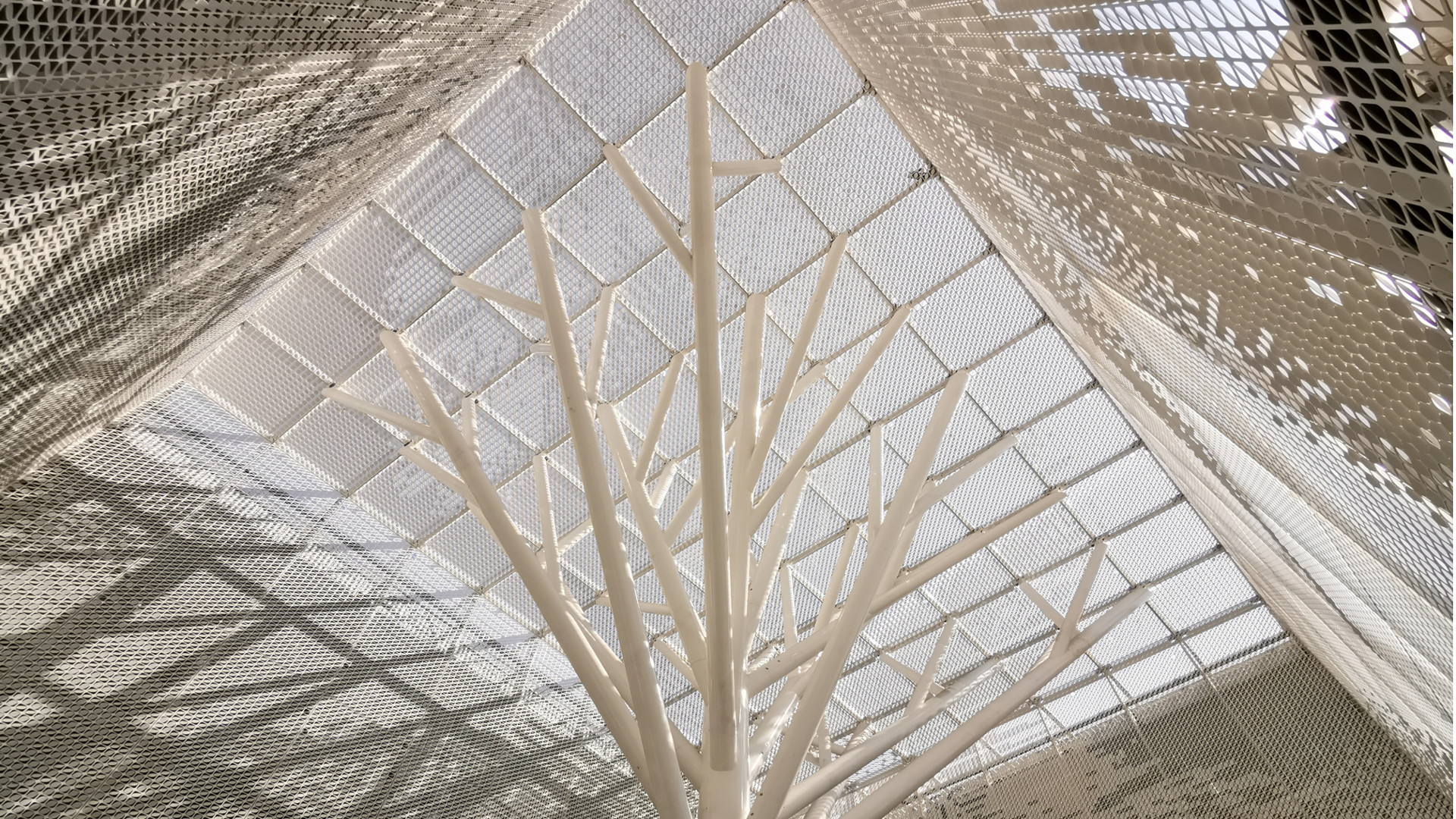 The project concerns a design of a new headquarters and production facility for the Raqtan Company. Raqtan is a Saudi family owned business specializing in the planning, design and manufacture of commercial restaurant kitchens, with comprehensive solutions for the food service industry. Their working area is Saudi Arabia, The Emirates, Bahrain, Oman and Kuwait. Raqtan has branches in Riyadh, Jeddah and Dubai. In Riyadh they have created the largest kitchen in the world serving 80,000 meals a day.

The project is a private initiative. In order to prepare the MODON areas and to prepare them for the Saudi policy memorandum 2030, this project has been declared a pilot project, which allowed the architect to deviate partly, as a test, from the conditions applicable to the MODON areas.

The general principle for the design of the project is “less is more”. The intention was to design the building in a simple yet effective, yet attractive way with an enormously clear and functional workflow. In addition, the building had to be a ‘state of the art’ sustainable building and hardly any energy-consuming building. It has resulted in an A+++ building in an environment where temperatures can reach 50-55 degrees Celsius in the summer.

The main structure for the office area, the showroom and the parking garage is a combination of pre-stressed concrete and a steel construction (around the patio). The main structure of the production hall and warehouse is a steel construction, consisting of steel honeycomb girders, girders and columns. At the location of the Chemical Storage, perforated steel has been applied in the facade in the shape and color of the facade panels of the production hall to achieve a continuous facade image of this hall.

The entire facade of the office, showroom and parking garage has a double facade of silver-coloured expanded metal against an independent steel construction (Metadecor). Partly to reduce sun exposure, but also to provide the appearance of the building with a skin. Due to its shape, the expanded metal is sun-resistant and keeps the outer wall free from direct sunlight. Together with the triple glass, this results in an enormous energy gain. In addition, the user can easily look outside, while the visitor on the street cannot see into the building. On the outside, these elements form the skin of the building. The elements are designed with as little detail as possible. To this end, the corners of the main building are rounded. The floor surfaces of the office and the showroom are completely glazed between the floor and the ceiling. The corners of the building are rounded to enhance the feeling of a skin, partly by avoiding the detail on the corner.

The facade and roof of the patio are made of coated aluminum Formatura from Metadecor. The shape of these Formatura panels is inspired by the shape of a date. The shadow effect of the alternately turned dates in the facade elements give the facade and ceiling of the patio the shape of palm leaves. The roof of the patio is held up by a huge steel tree produced in the Netherlands. The tree stands in a pond which provides cooling outside during the day and is tiled in the pattern of a Saudi headscarf worn by men. The patio provides daylight in the offices and the production hall and the patio is also an outdoor place for employees to relax and cool off outside.

The facade at the location of the main entrance and entrance to the parking garage is made of brass and forms an accent. With the glass on the ground floor of the showroom, this brass is the only detail in the facade of the main building. For the rest, the offices, showroom and parking garage are not recognizable as such as functions in the facade.

Because many functions are housed in one building mass, the project has an interesting cross-section with different storey heights. Parking garage 3 meters, offices 4 meters and a showroom 10 meters high. Due to the design of the facade, the various functions on the outside of the building are imperceptible. The functional design of the building, with various functions in one mass (offices, showroom, patio and parking), together with the dynamic open work floor of the offices, is unique in a MODON district in Saudi Arabia. The entire building forms a pilot to achieve adapted building regulations.

Sustainability: In terms of sustainability and energy consumption, this building is unique in a MODON district. It has the A+++ rating. Energy is generated by solar panels on the roof of the production hall and warehouse. At night (temperature difference is the smallest) this energy is used to control heat pumps that bring the water in the water tank of the sprinkler installation to a temperature of 19 degrees Celsius. In the daytime situation, the coolness of this water is used to cool the office and the production hall. The water in the sprinkler tank is normally never used. The sprinkler tank is located under the ramp of the parking garage in the basement. The heat pumps are controlled in anticipation from Japan.

All glass is triple glass. On the one hand for lower energy consumption, but on the other hand for keeping the glass clean. Double glazing condenses on the outside. Due to the dust and the wind, the glass is very intensively polluted. Triple glass does not condense, which reduces the costs of washing the glass enormously. The glass and the expanded metal facade are kept clean with high air pressure. The facade insulation consists of 140mm PIR. The roof insulation consists of 240mm PIR. All “cold leaks” have been avoided. All walls of the production hall and warehouse are built from the highly insulating Kingspan panels. All walls below ground level and all undersides of floors are equipped with 140mm PIR. All lighting is LED lighting with presence detection throughout the project. 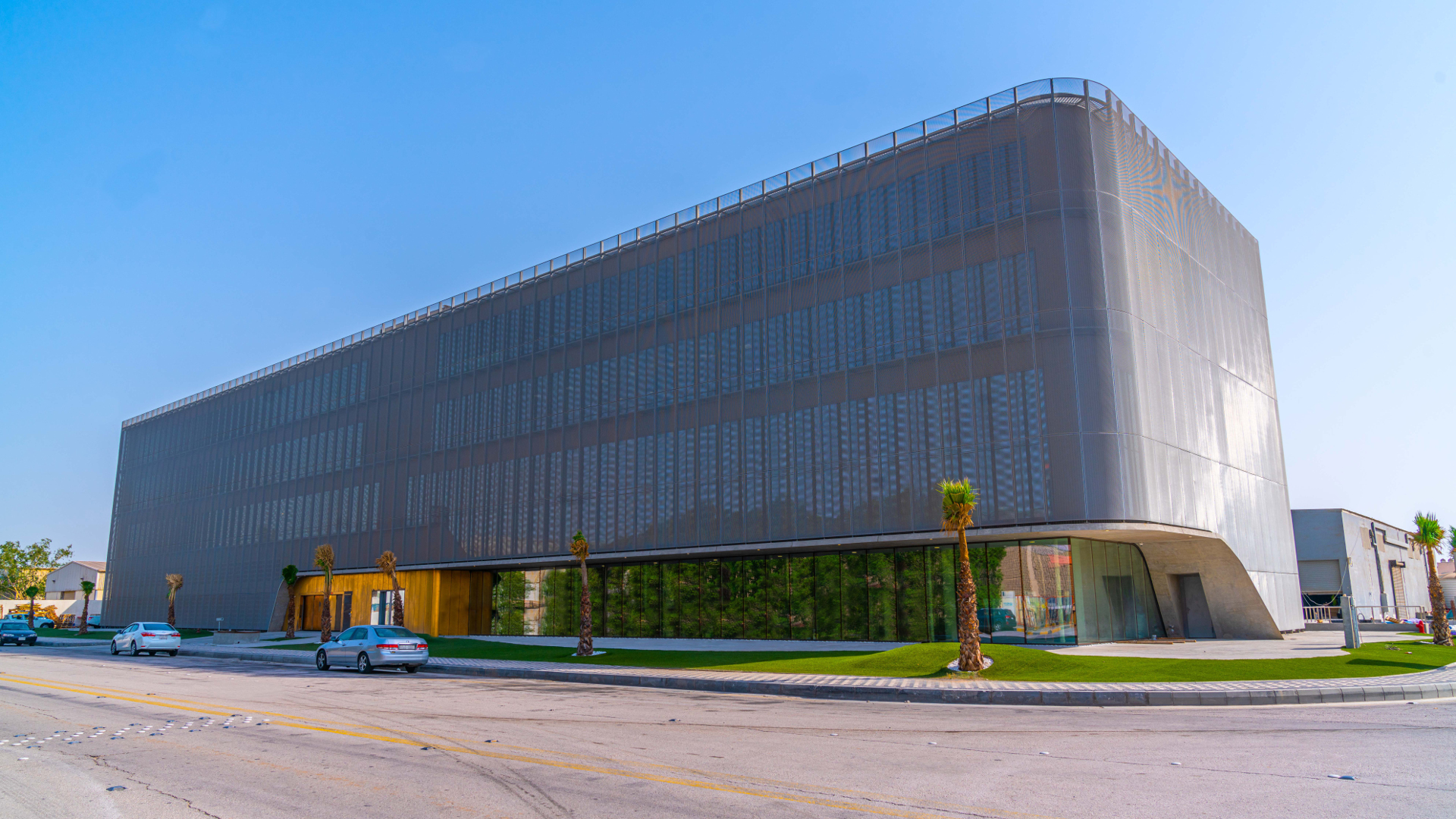 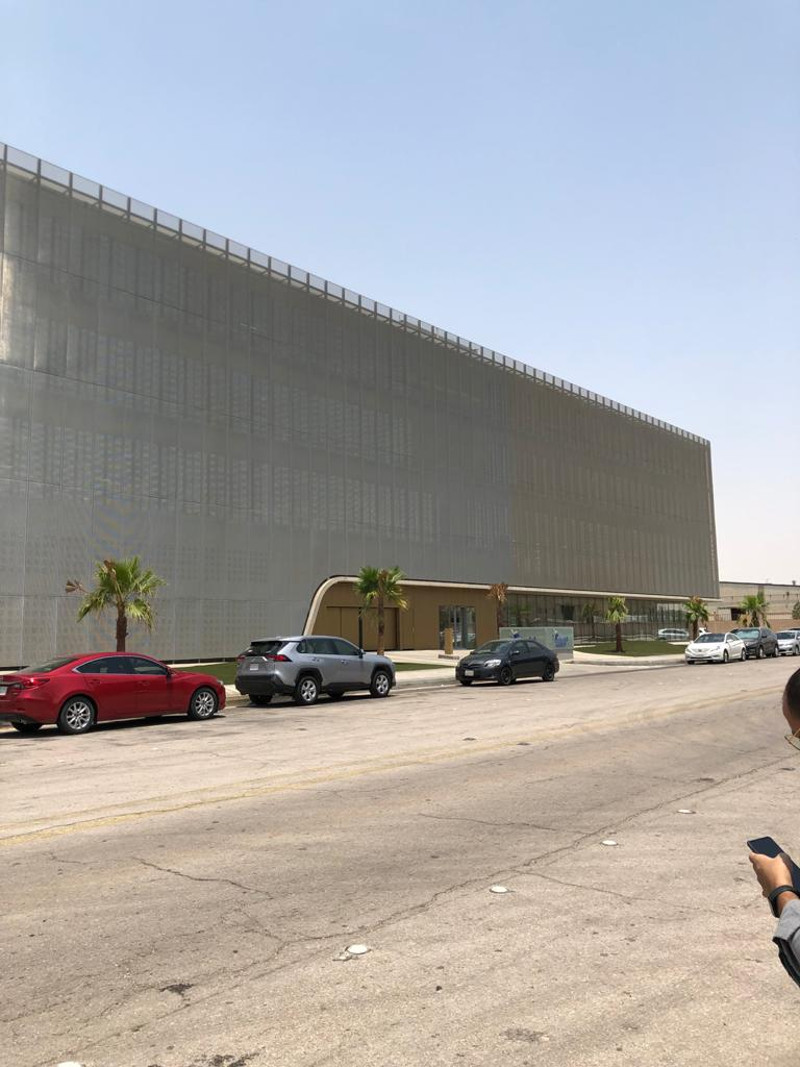 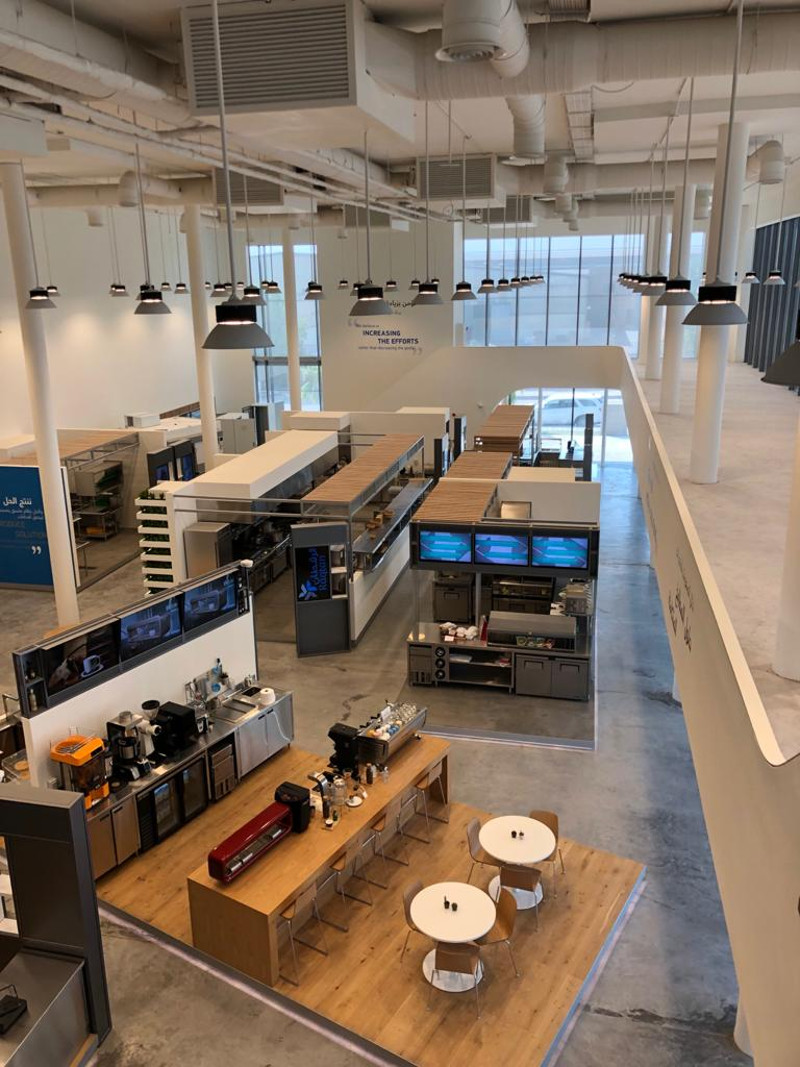 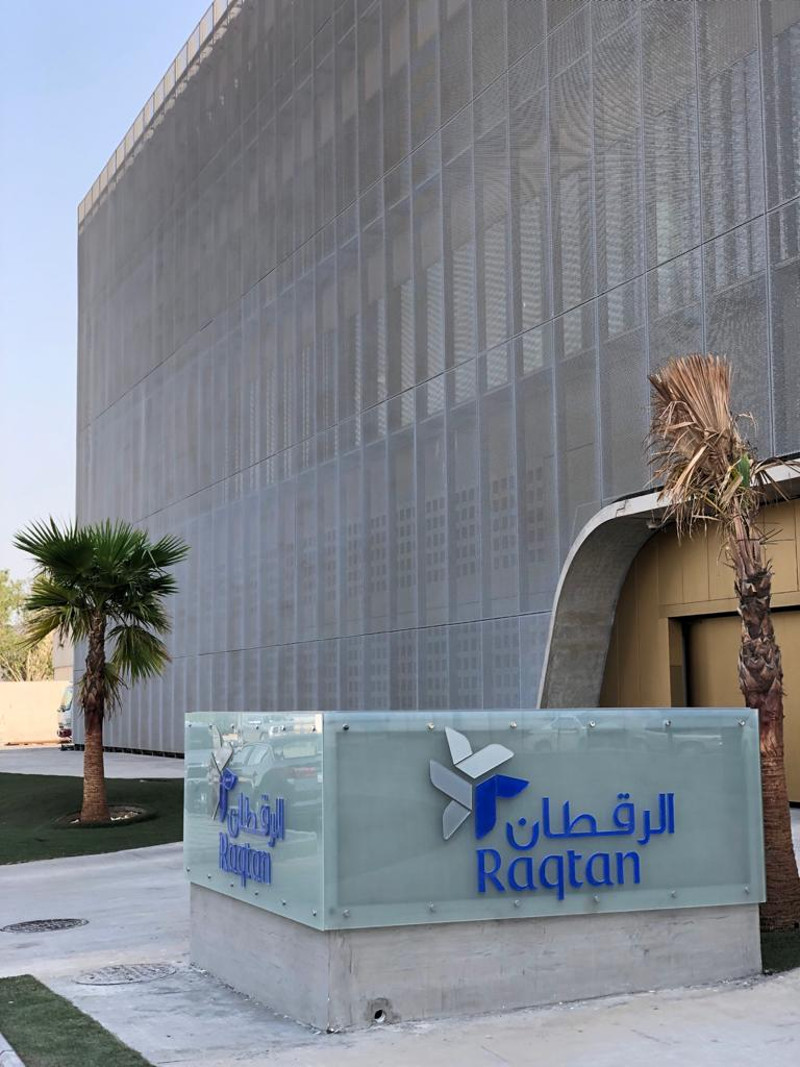 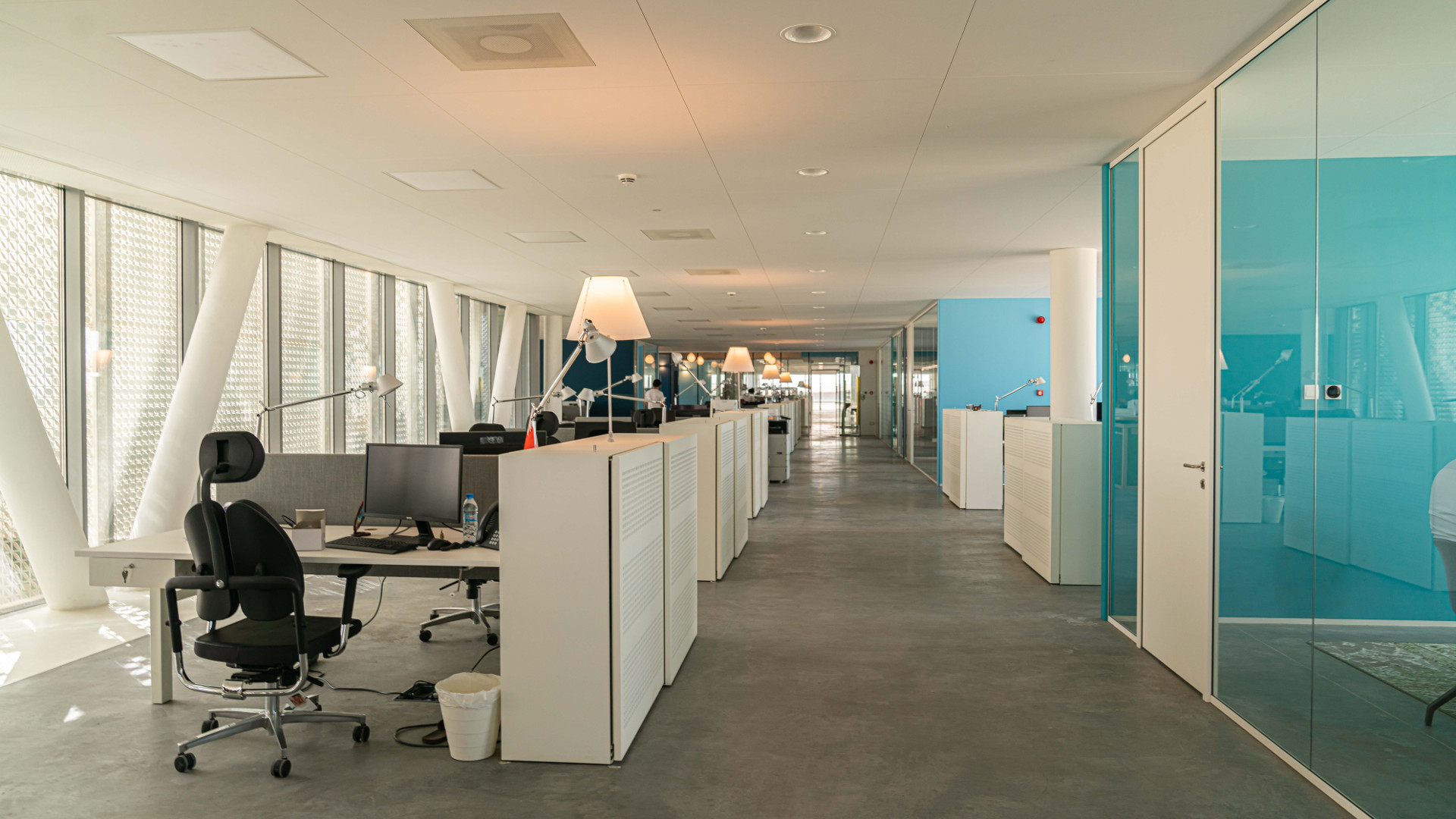 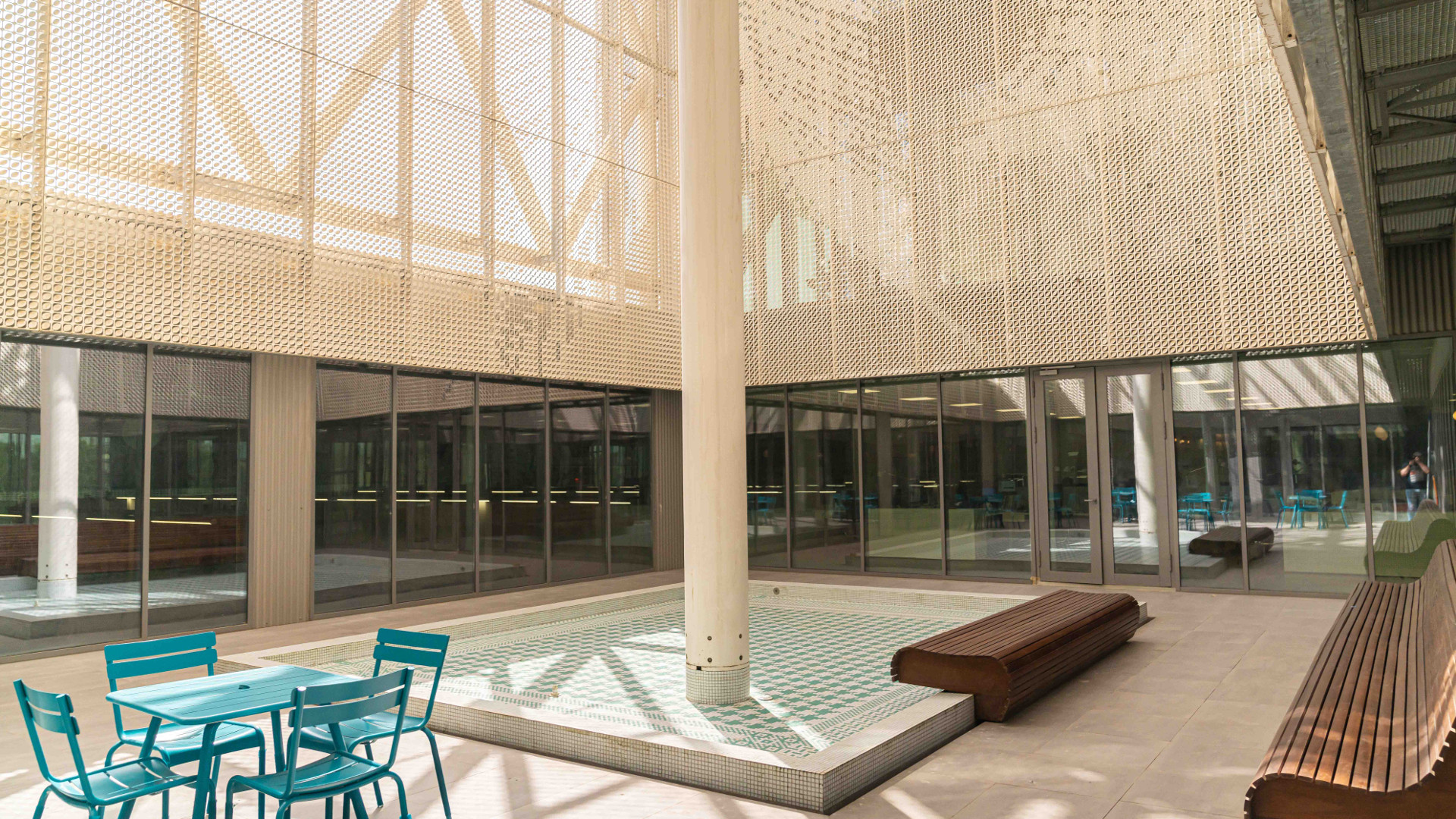 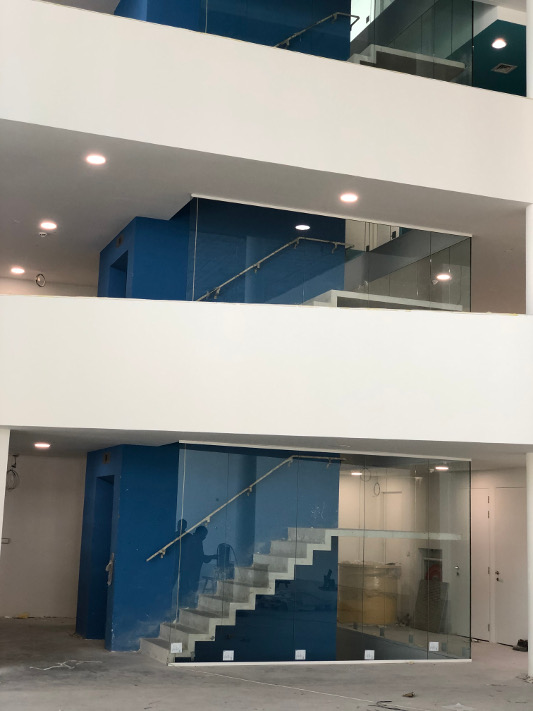 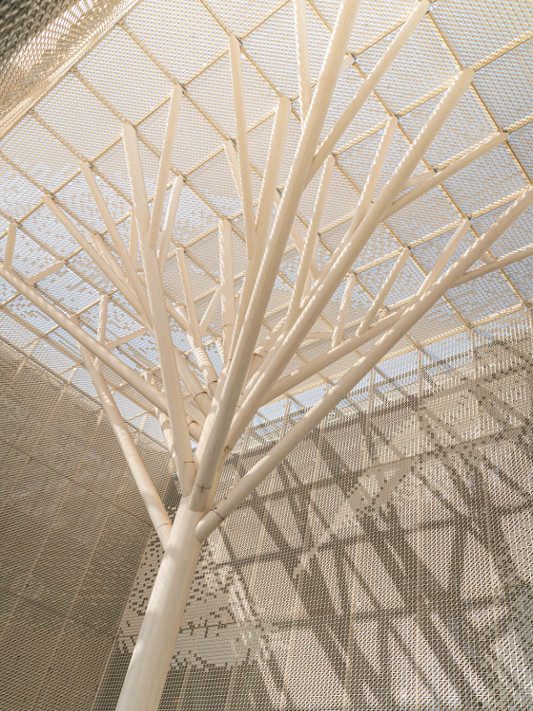 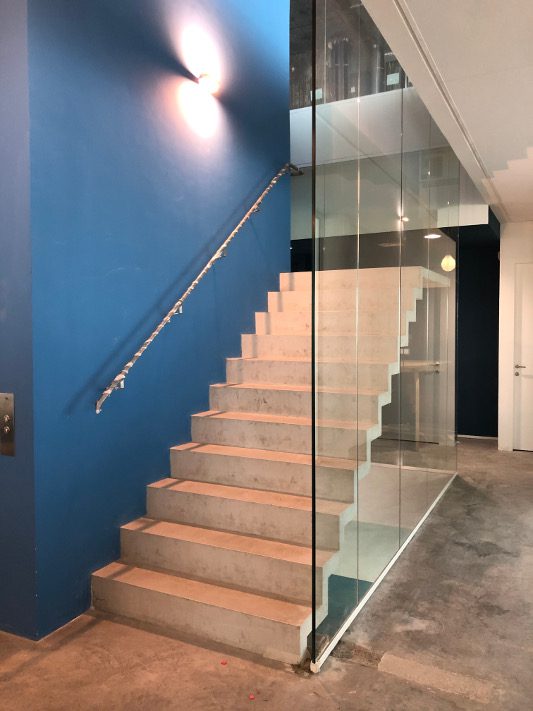 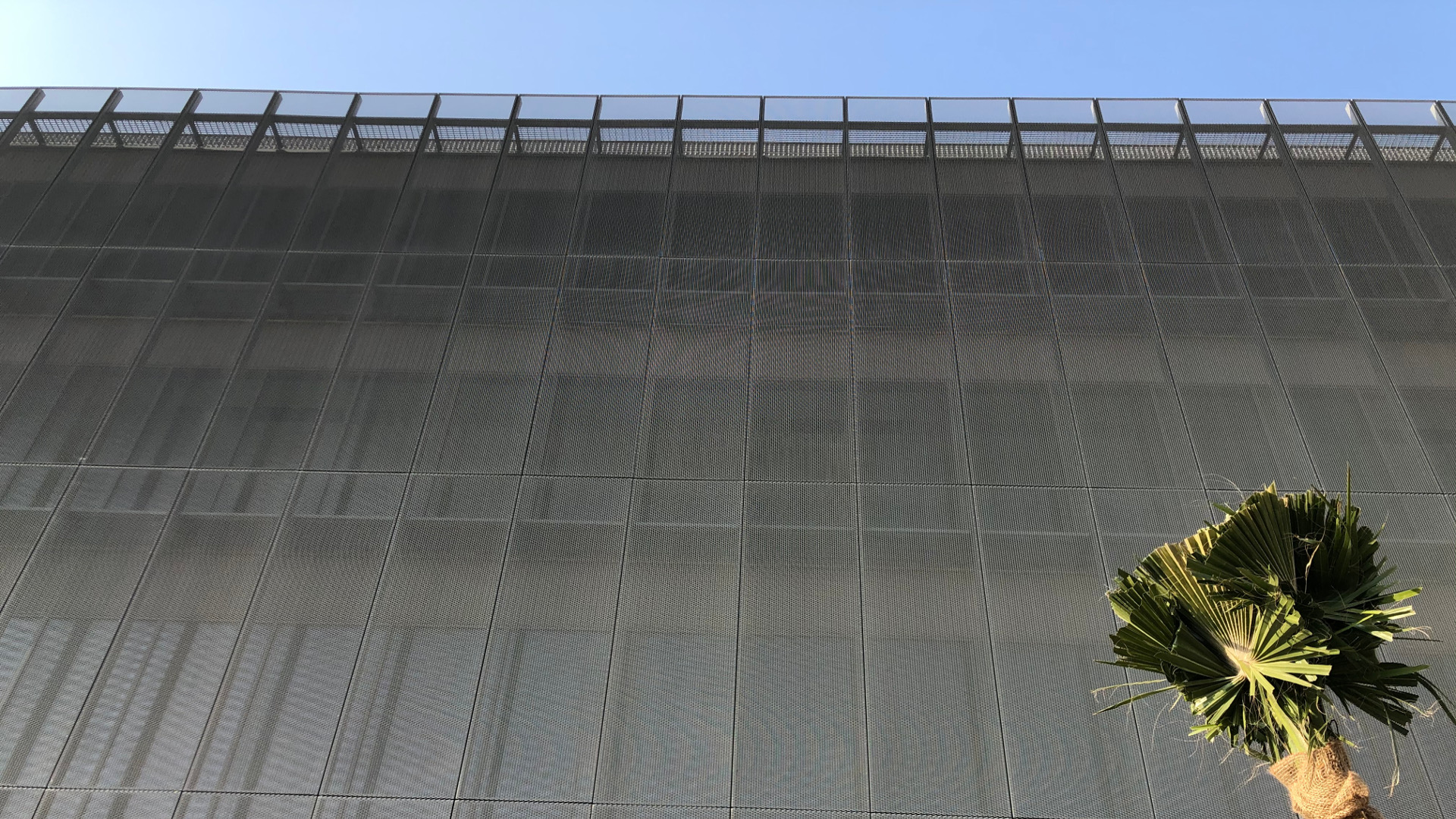 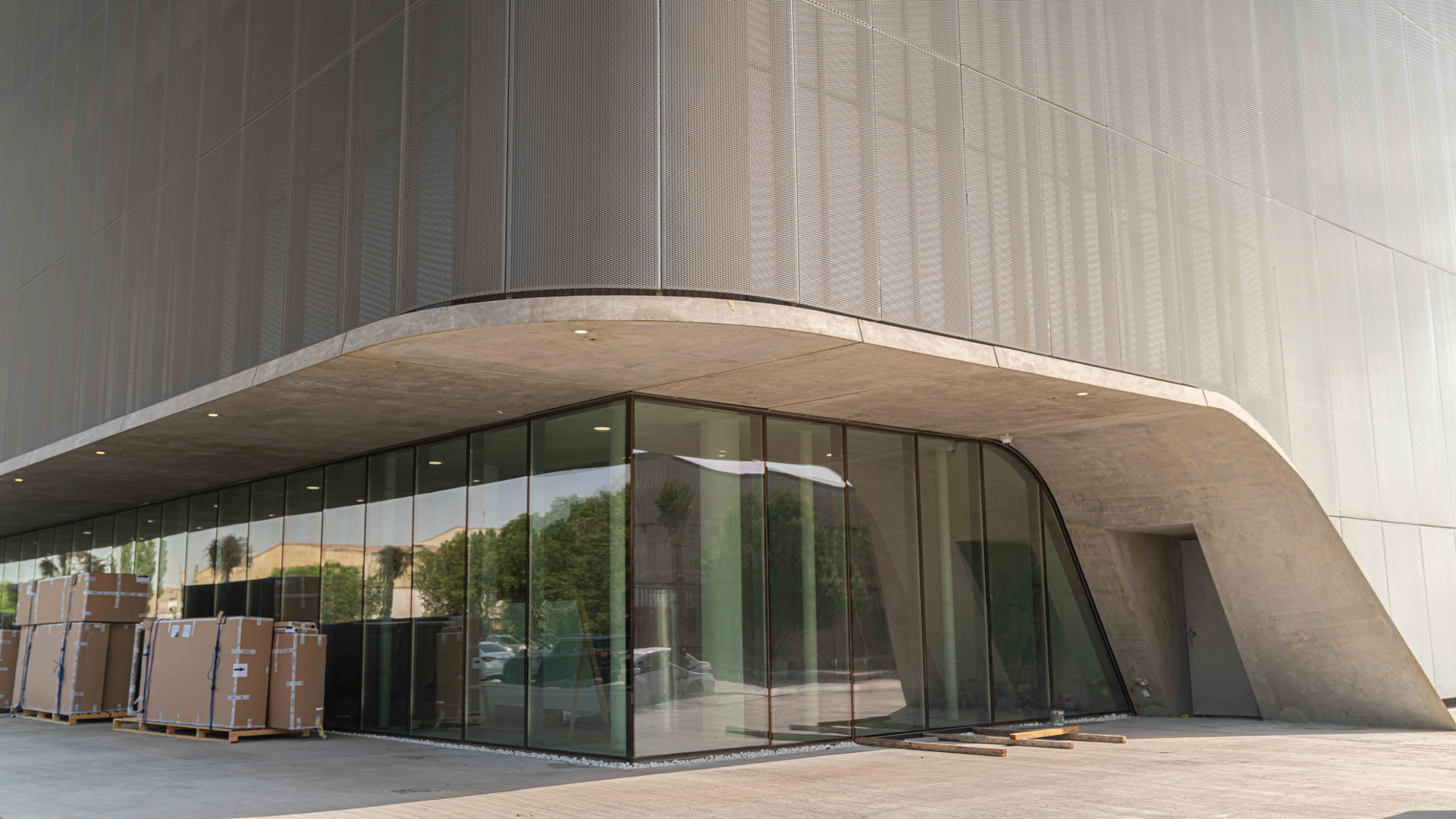 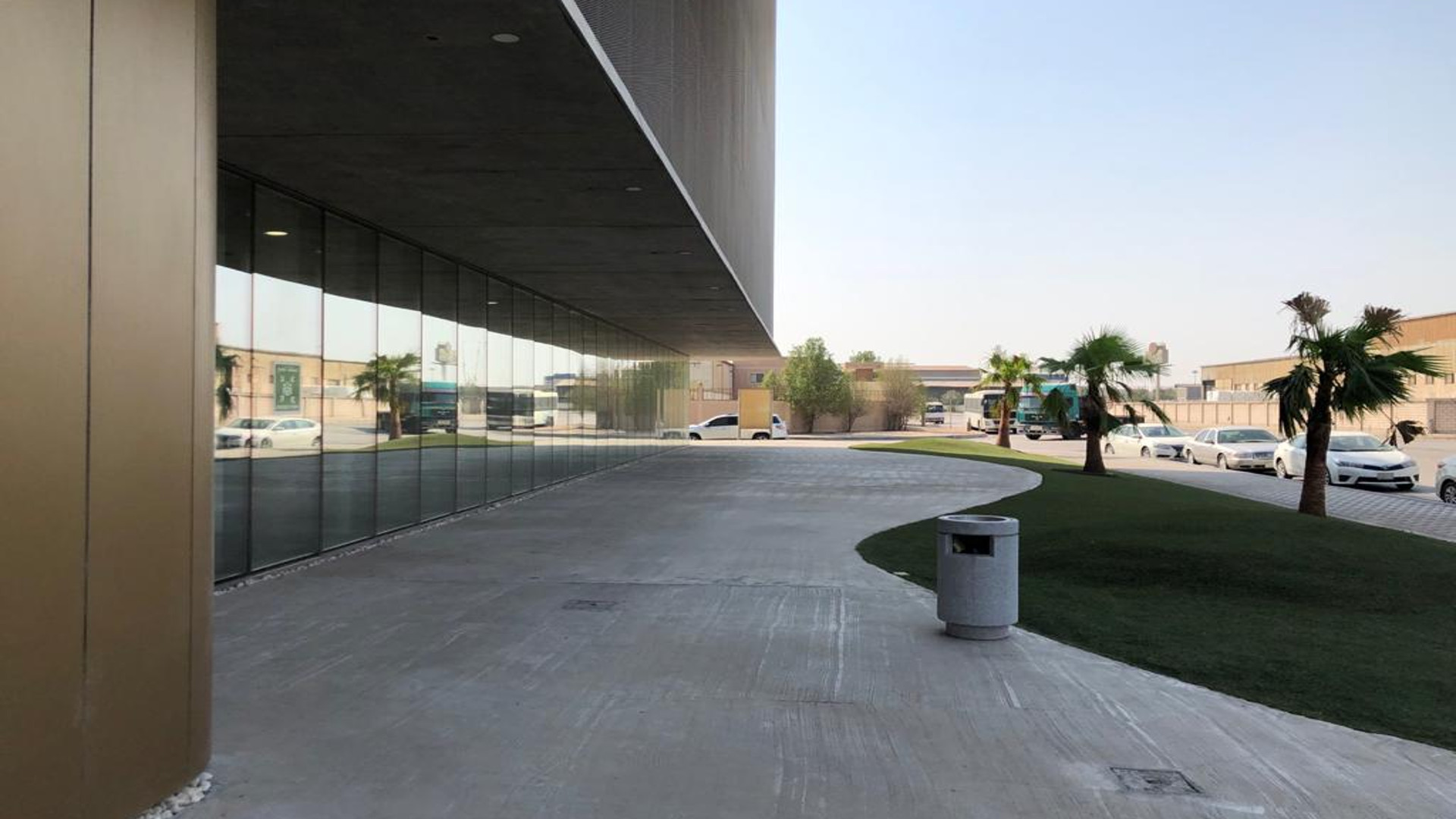 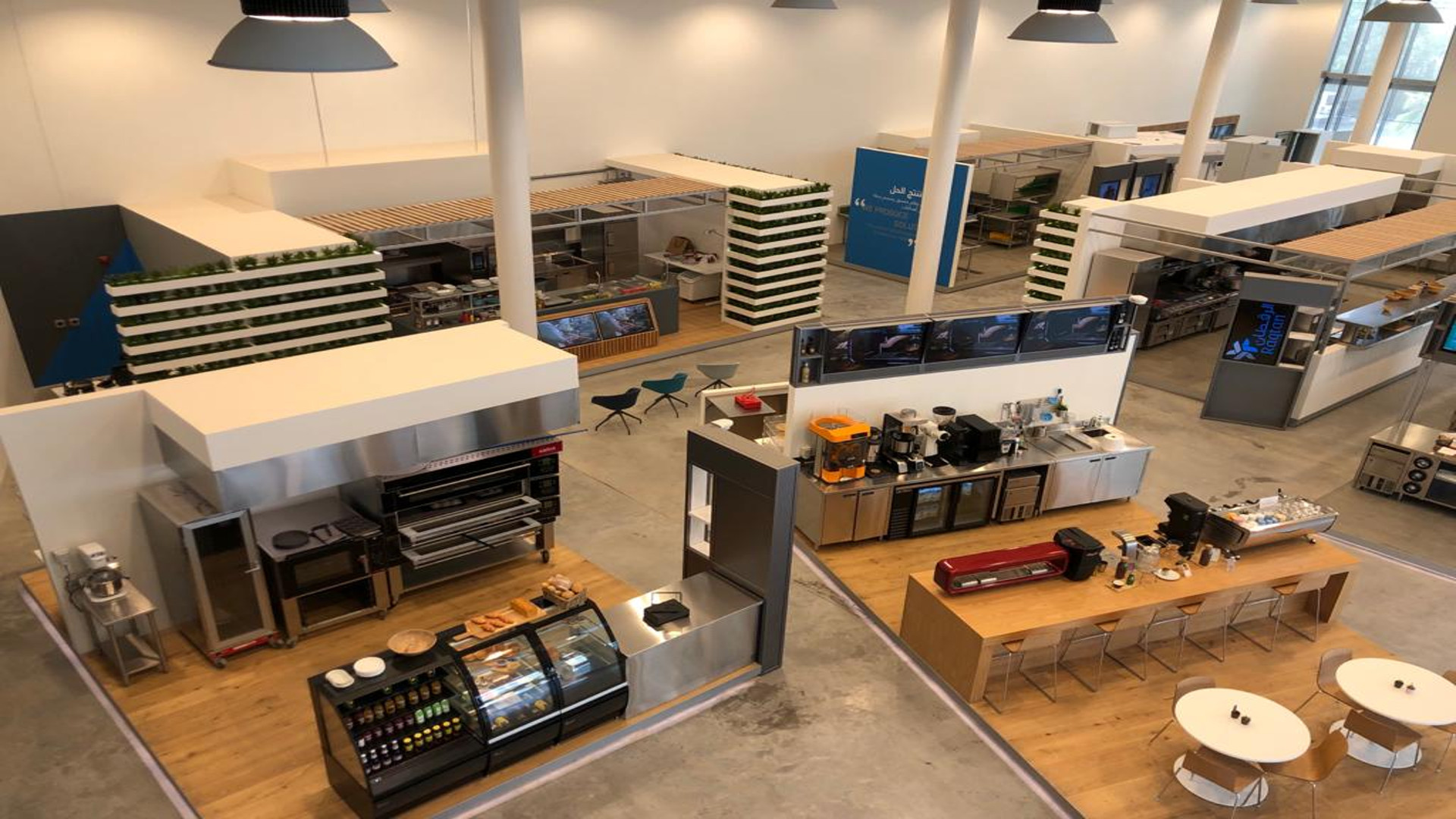 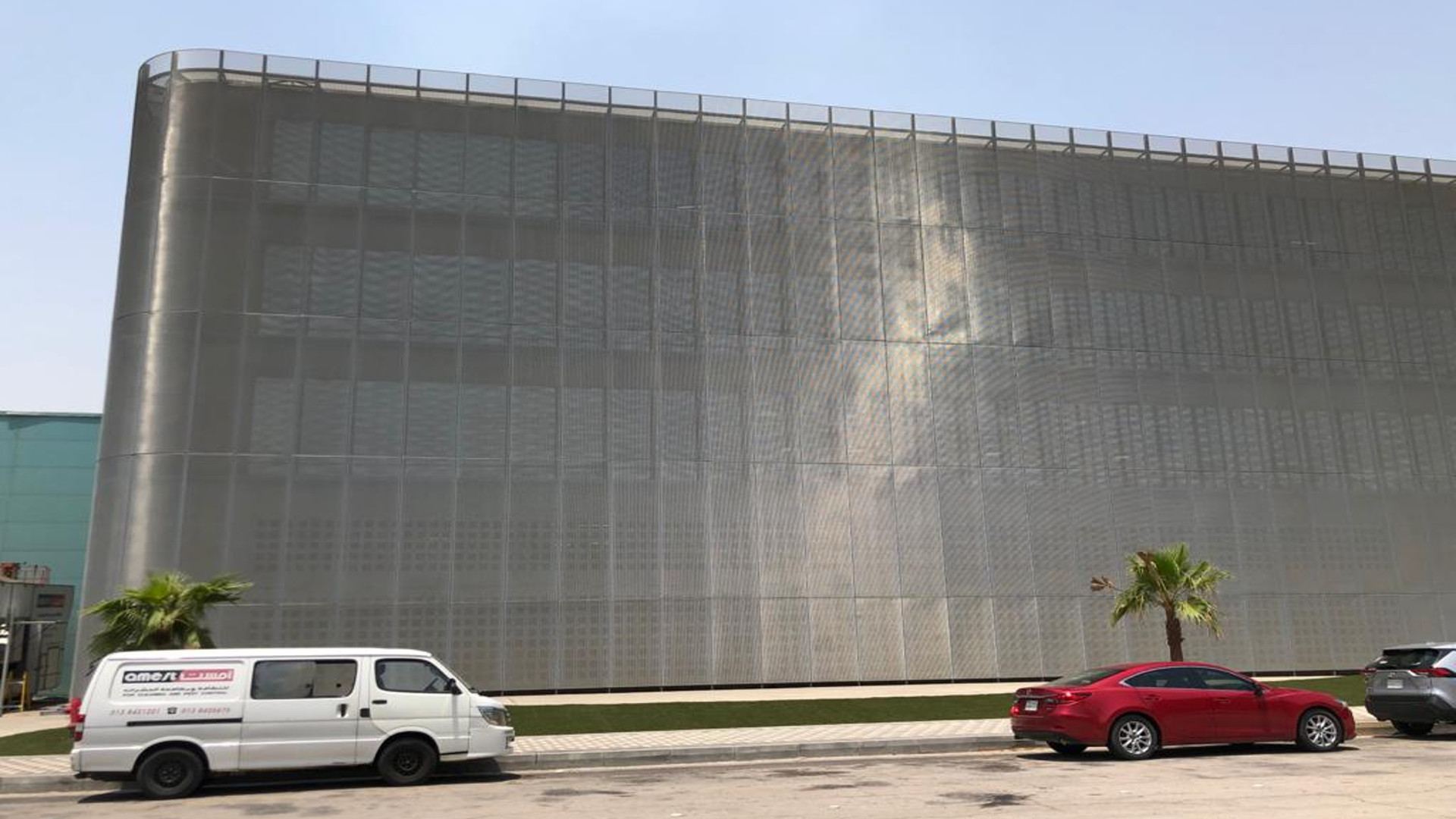 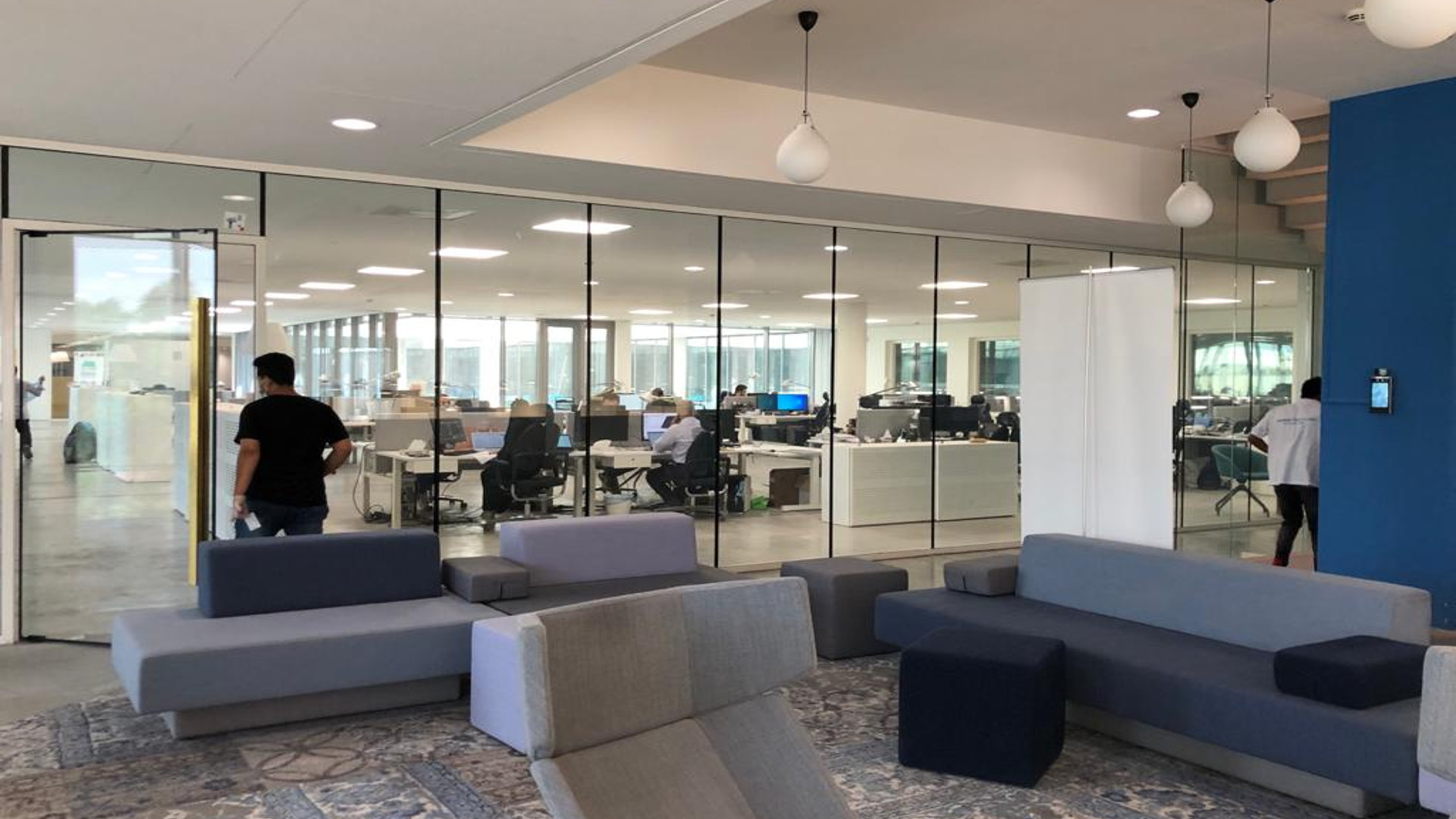 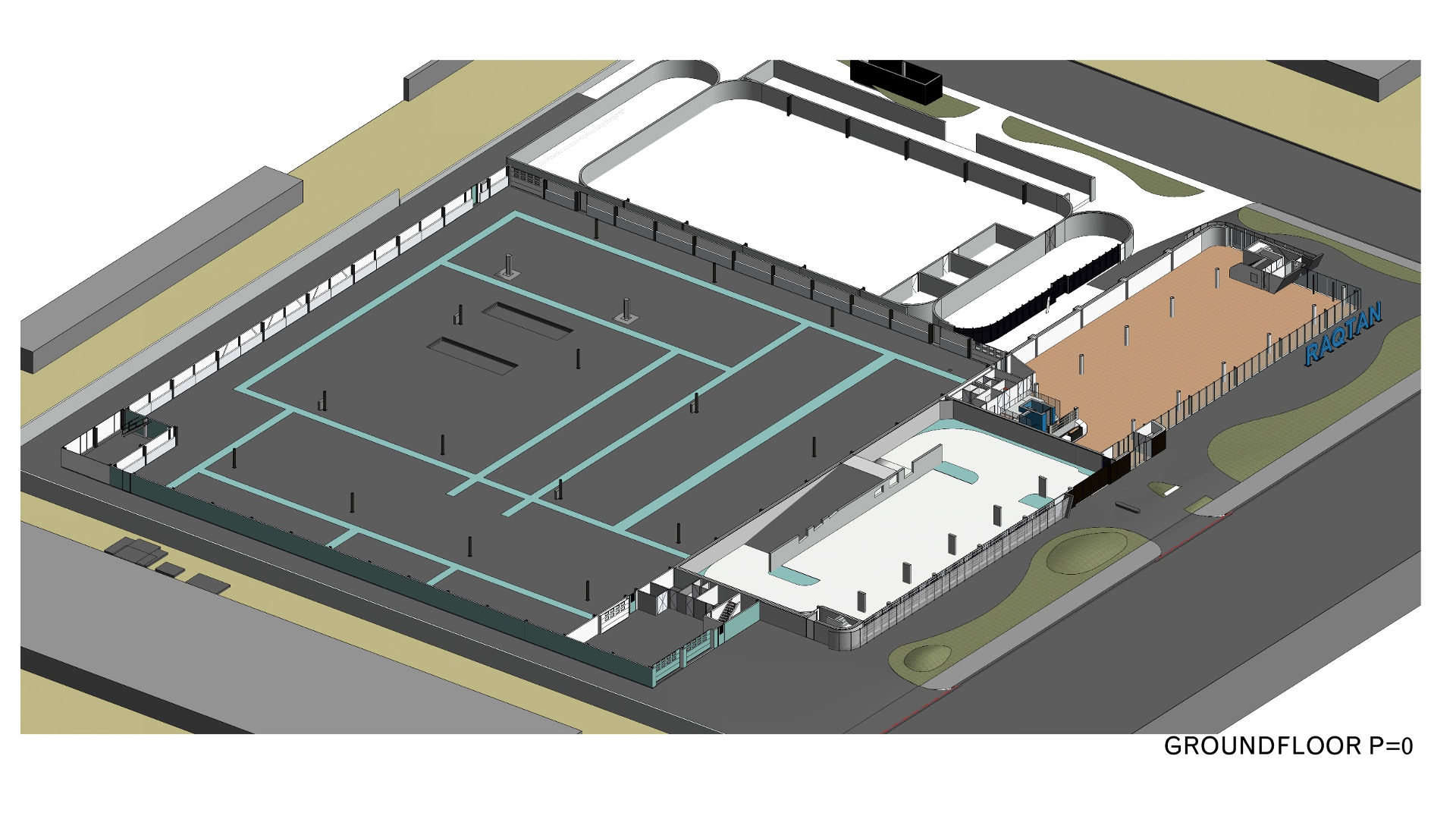 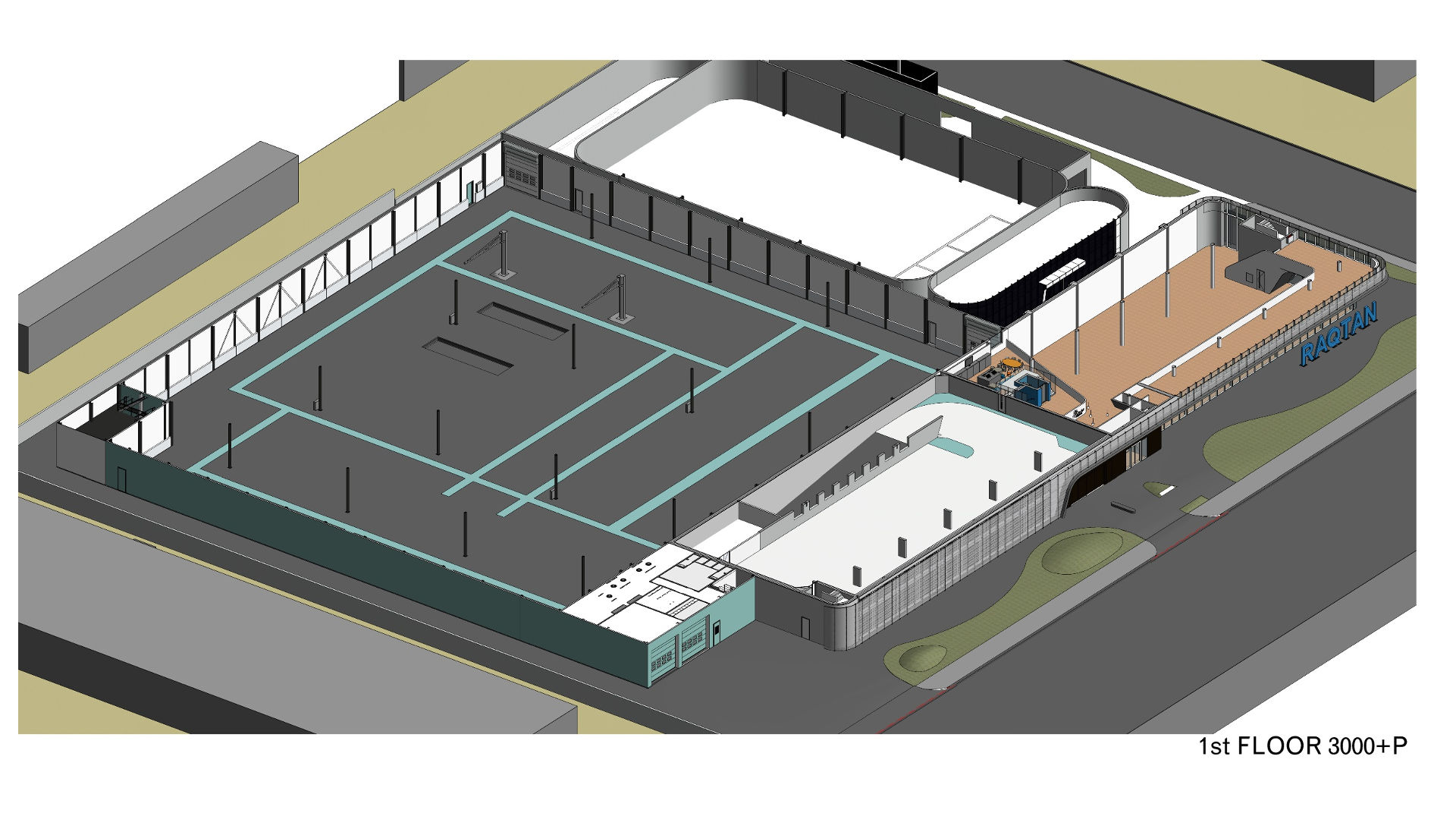 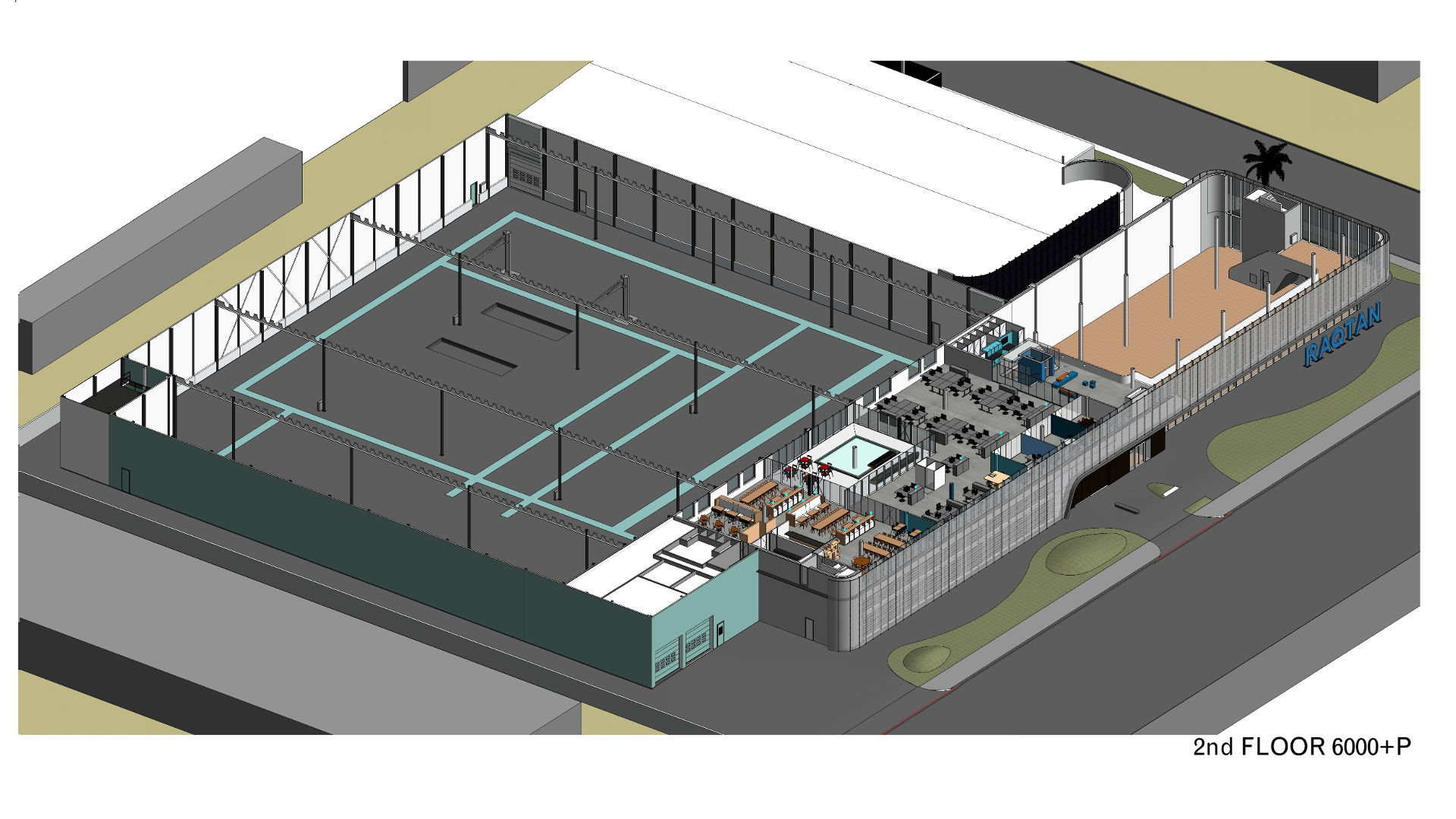 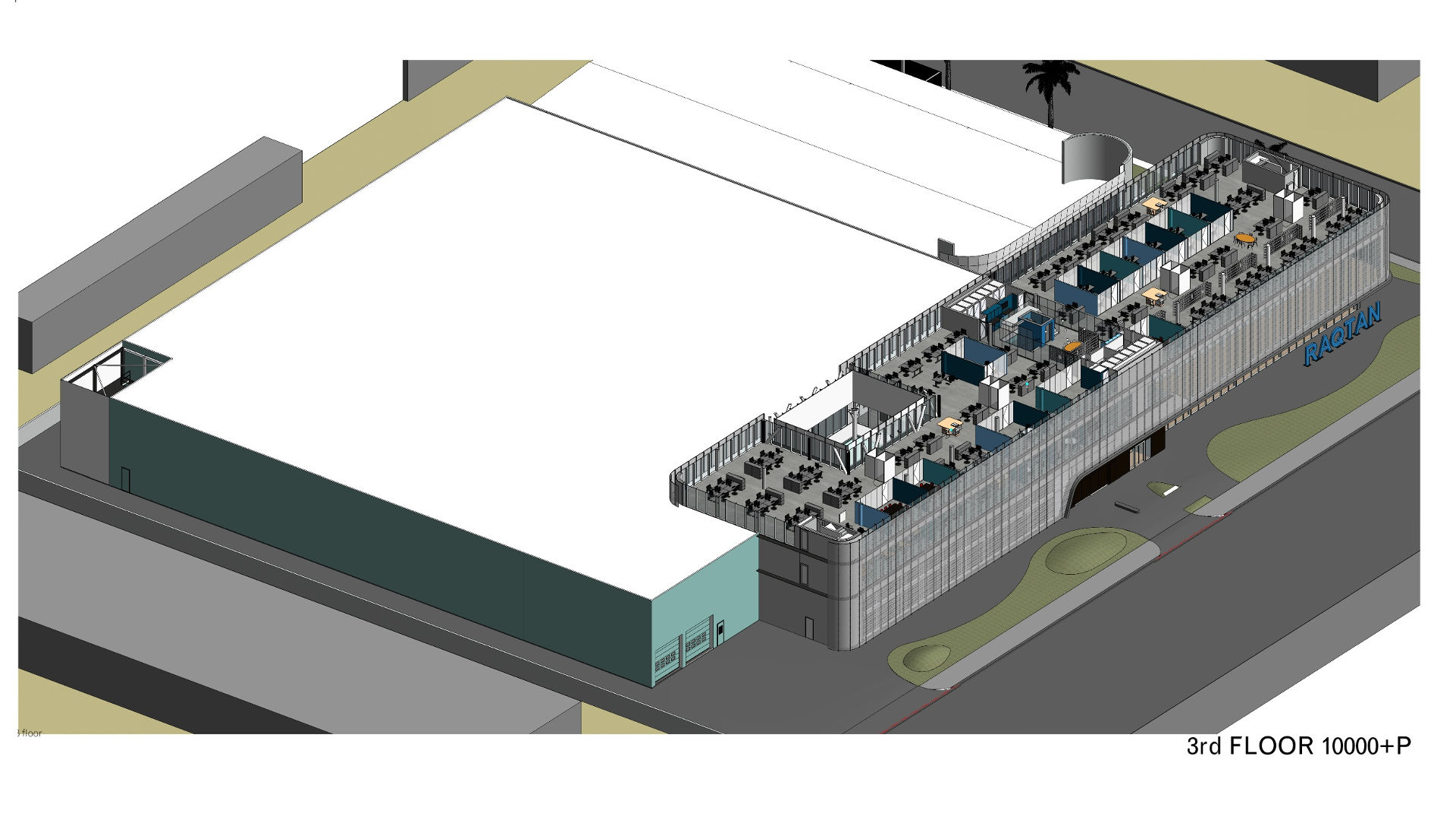 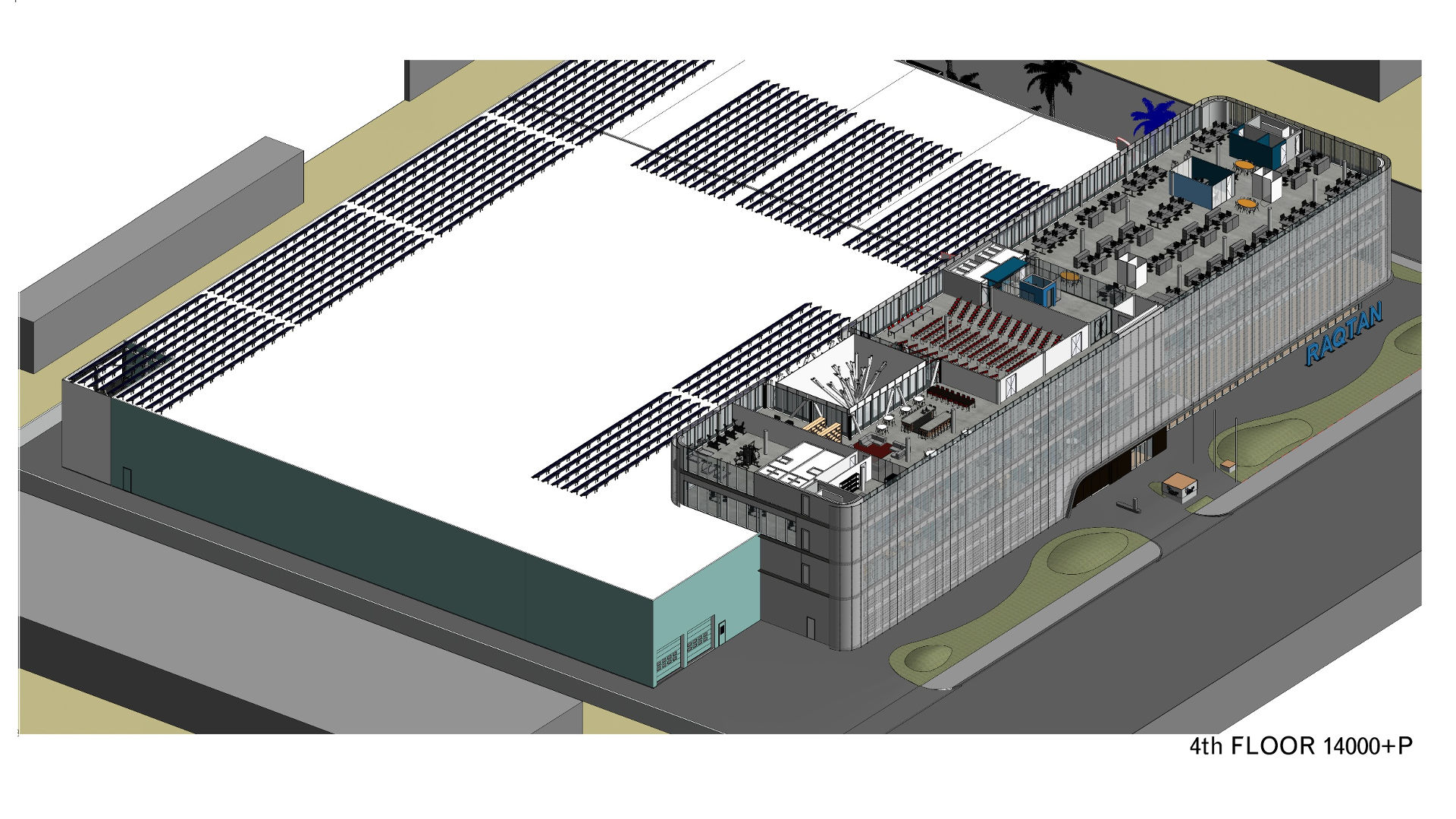