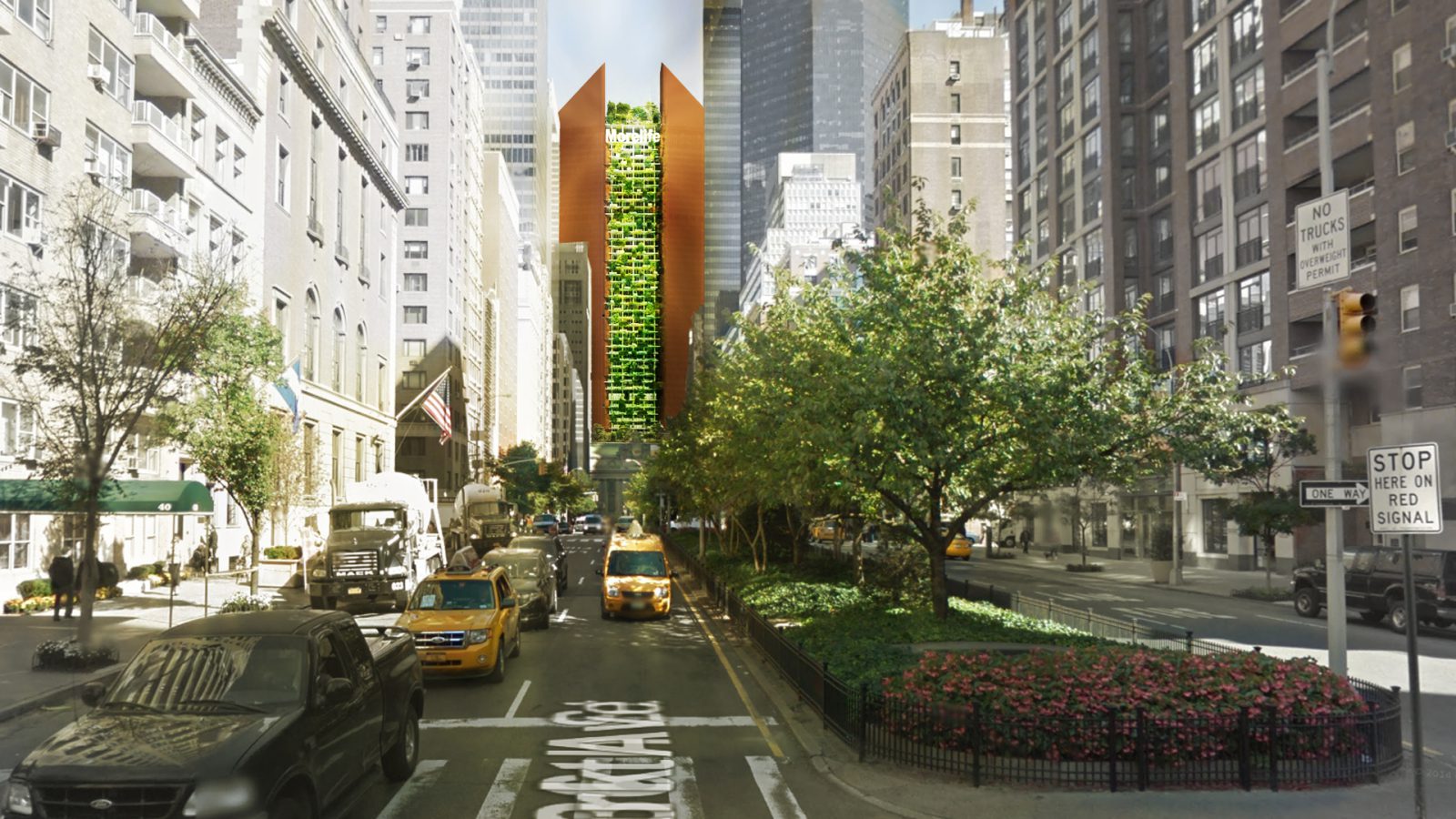 Park Avenue is a green connection between the northeast to the southwest of New York City. It is the link between Union Square Park and the Railroad Bridge over the Harlem River. North of 97th Street, the green Avenue change in an rusty railroad. The Grand Central Station, the Pan Am building and Hemsley Building forms a discontinuity in the flow of the north-south connection.

By there position, they exist as an image icon in New York City. The design of the new façade of the Pan Am building refers to the green at Park Avenue and the transition into the railroad on the north side. Across the width of Park Avenue, the facade of the Pan AM building is cracked open and together with the roofs, provided with lots of greenery. This suggests a continuity of the green space

in Park Avenue. The flanks of the building are covered with expanded metal of Cor-Ten steel, which refers to the rusty railroads at the north of Park Avenue and the Grand Central Station. On the roof,

the flanks are angled shaped to accentuate the broad green band of Park Avenue. In these angles, the ecological and sustainable heat pumps of the new installations for the building can be placed.

The greenery acts as a filter for the supply of clean air inside the building. The greenery also provides the employees in the Pan Am building a peaceful oasis in the urban hectic. The employees can go outside in the exploded façade or on the roofs, and have a break between the vegetation for rest or sports. In this way New York City will become greener and more sustainable, as it did start at the High Line at 18th Street designed by Piet Oudolf. The flanks of the Pan Am building will be covered with a screen of expanded metal of Cor-Ten steel. This expanded metal is durable due to its own protective layer. The characteristic of expanded metal is that the view from inside to outside is not obstructed and that there enters sufficient daylight at the workplaces. From outside the expanded metal forms a closed skin with a natural rusty color. The benefit of this property is that any required facade can be placed behind the expanded metal. The existing facade can be renewed or the existing facade can be maintained. At renewal of the façade makes a higher insulation possible and changes the building to more sustainable. The expanded metal also forms a sun screen this way, why the

building needs to be cooled less on hot days. At the cracked open green façade, shading is not required, due to the large overhang. The expanded metal is applied as plates without a frame flowing into each other and making this facade to a second skin. The 30-inch space between the facade and expanded metal ensures that the facade can be maintained on each floor.

The continuation of greenery, in the width of Park Avenue on the facade of the Pan Am building and cladding the flanks with expanded metal of Cor-Ten steel with a natural rusty color, which obliquely

raised mass, will make this reimagined building for a long time an new icon in New York City’s Manhatten. 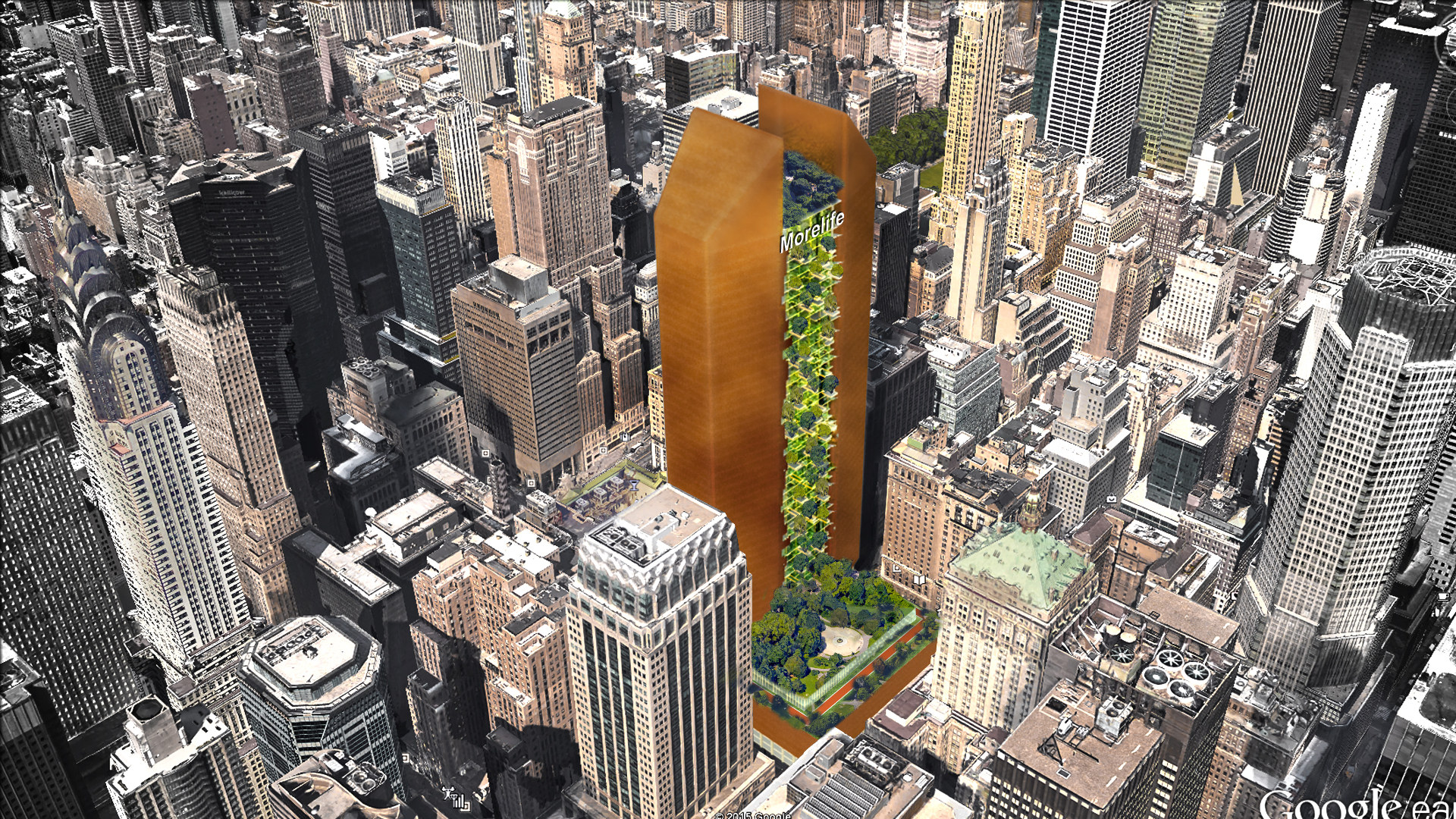 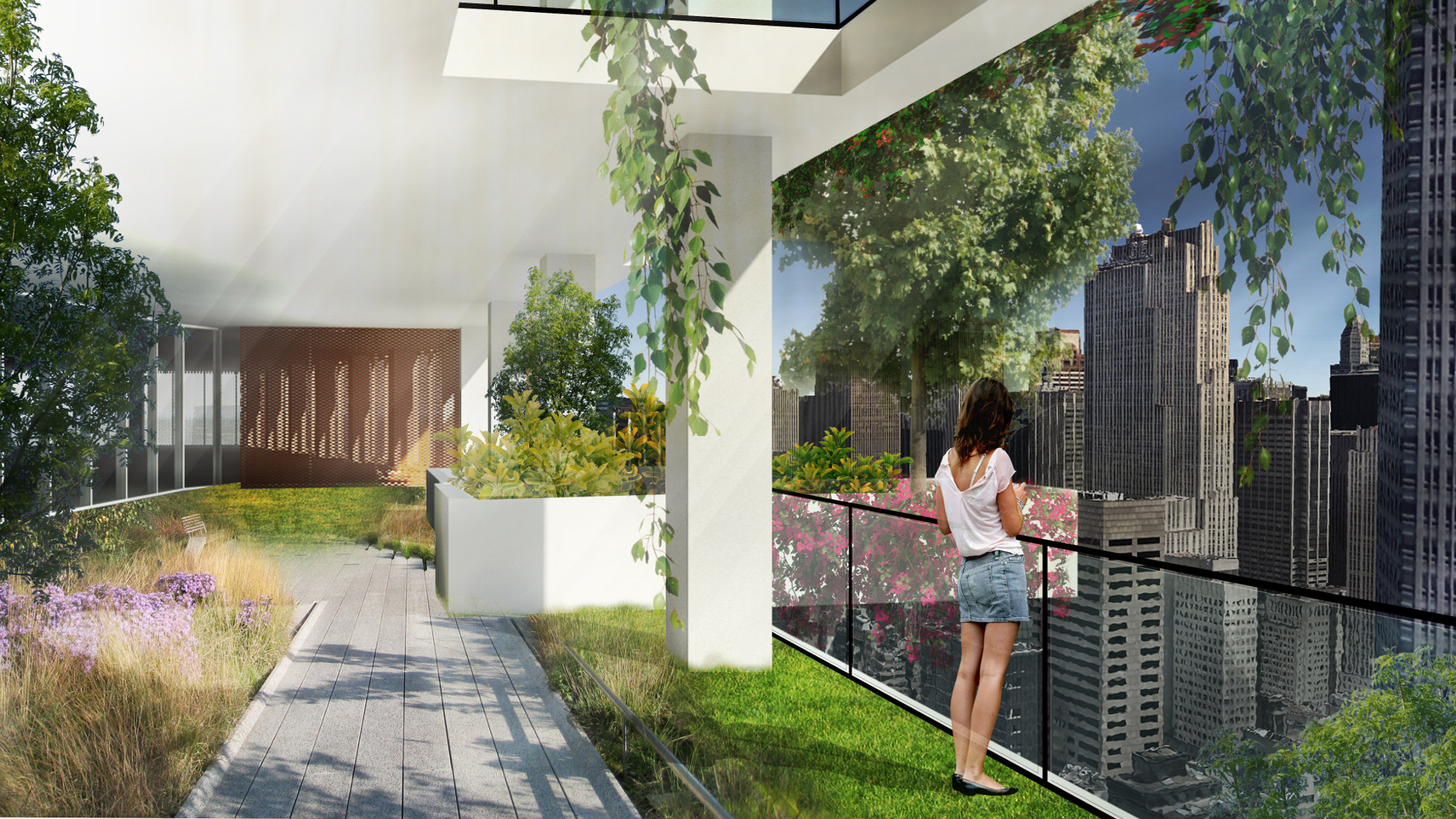 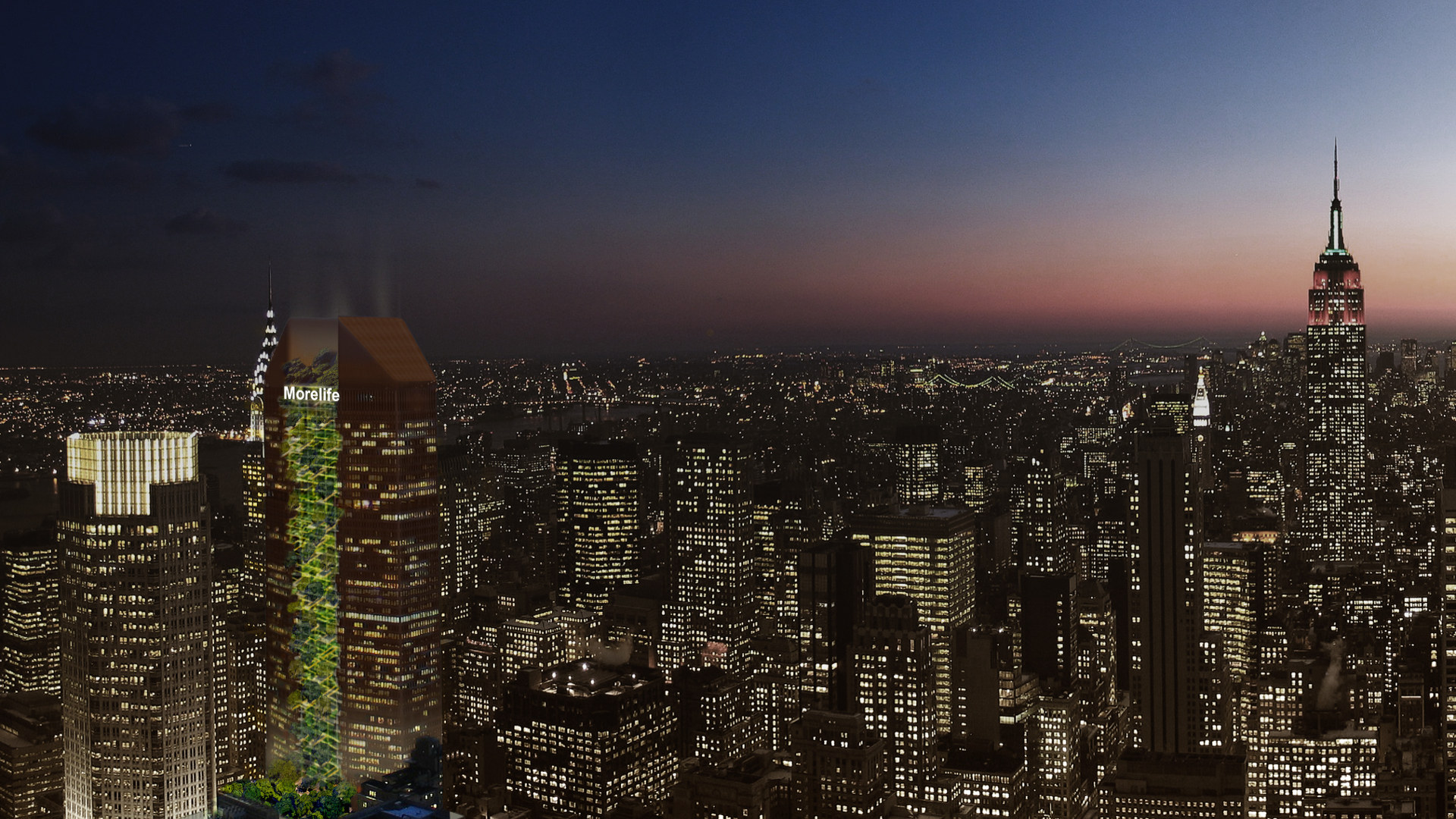 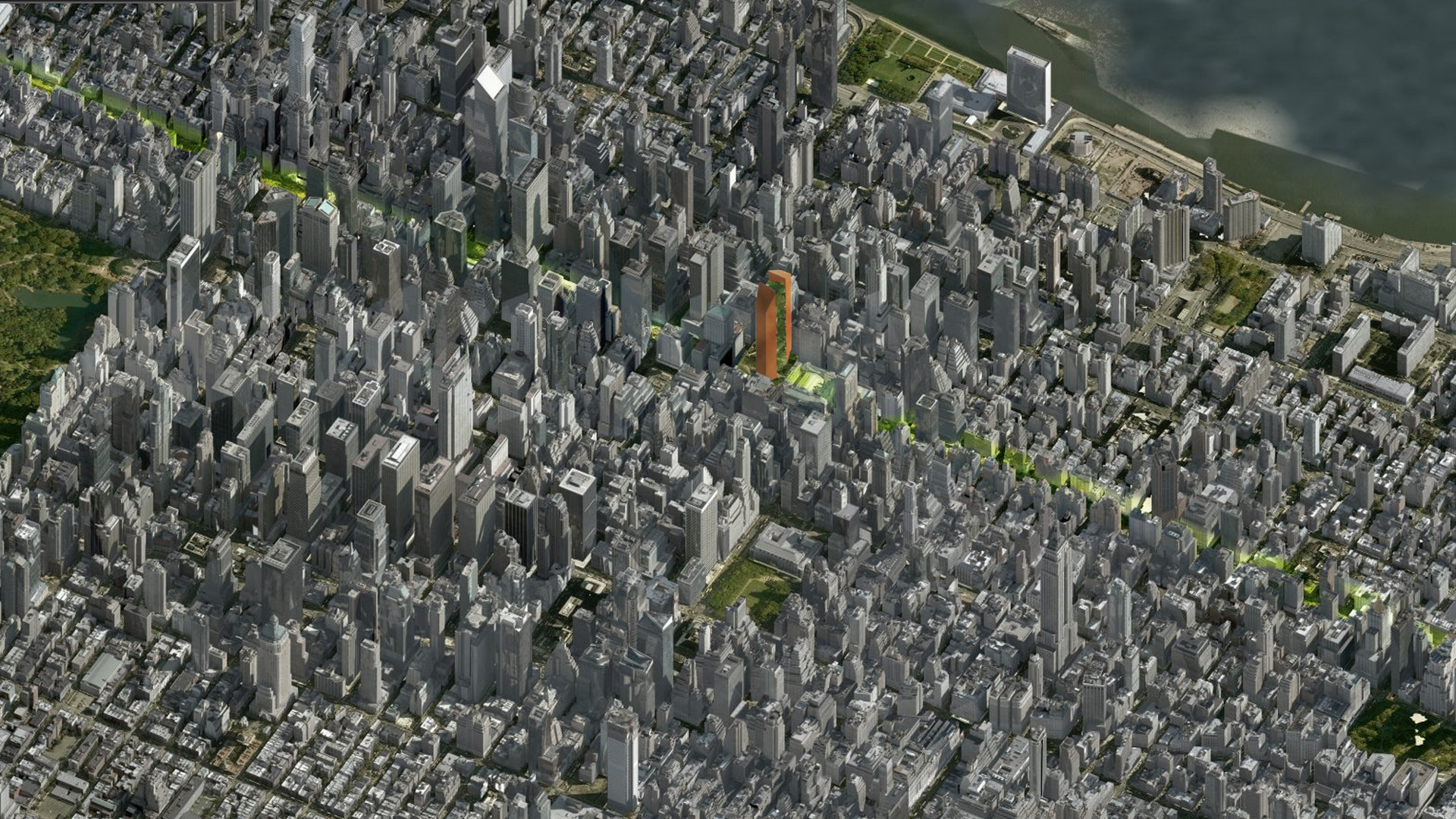 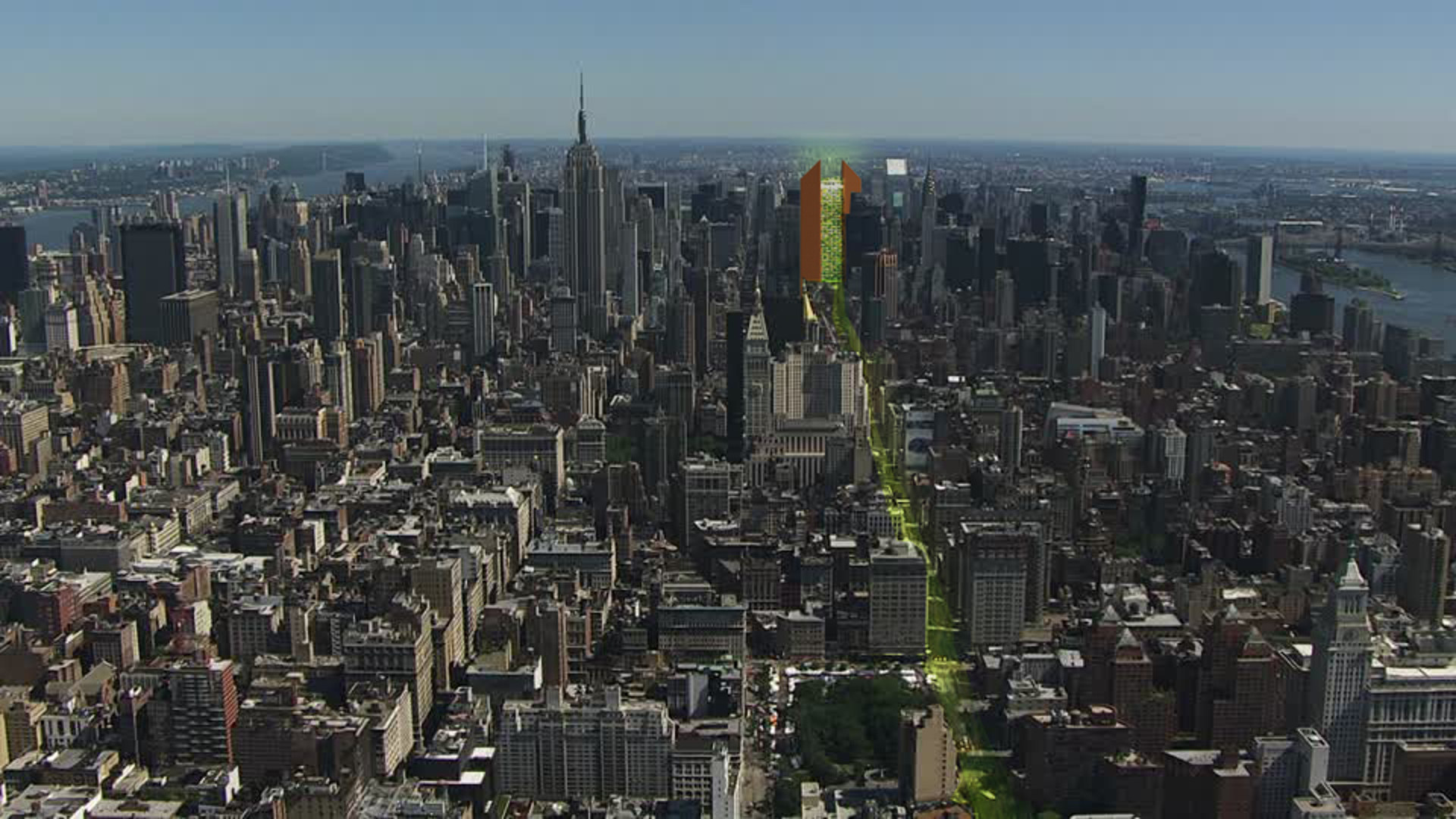 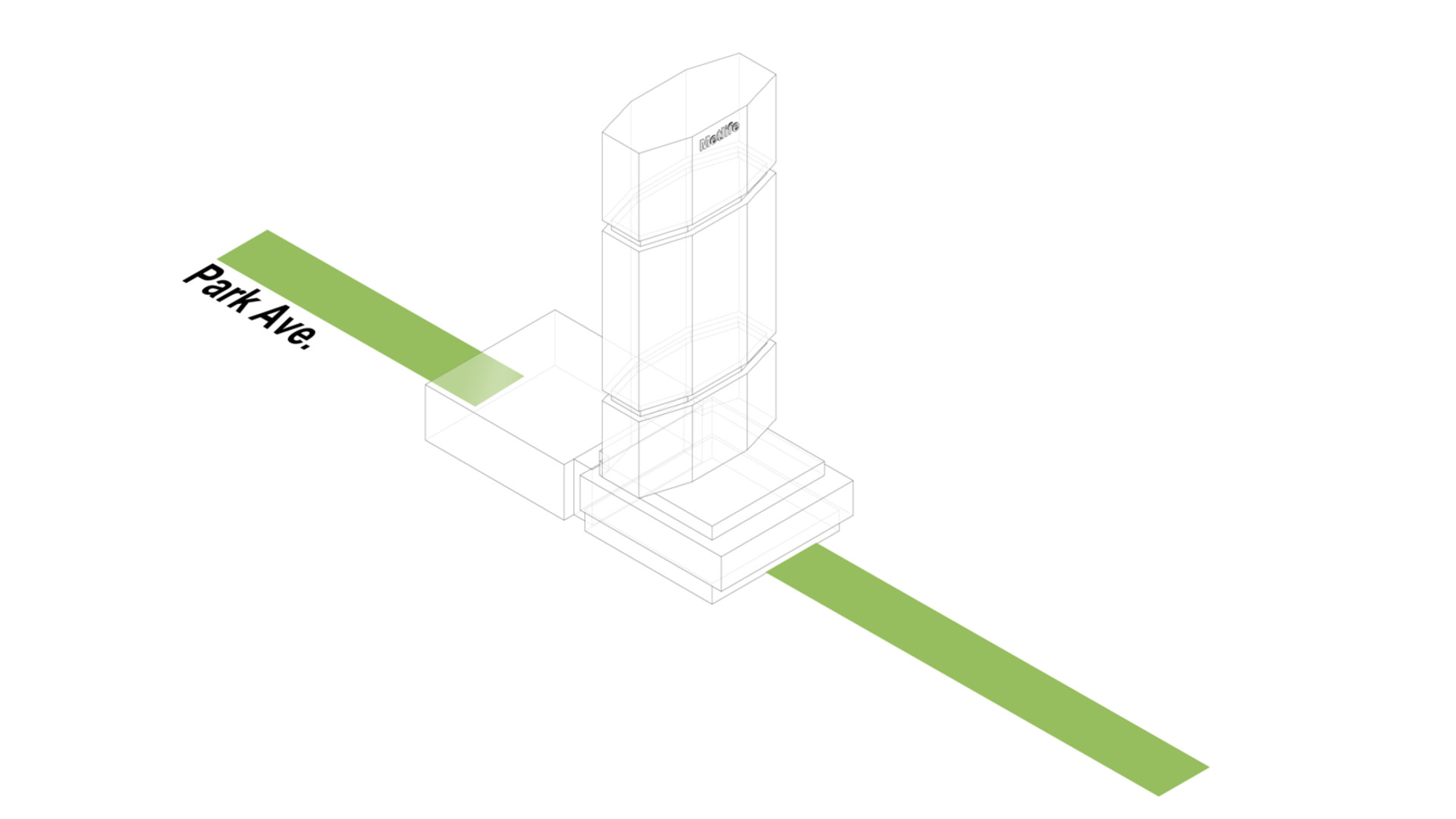 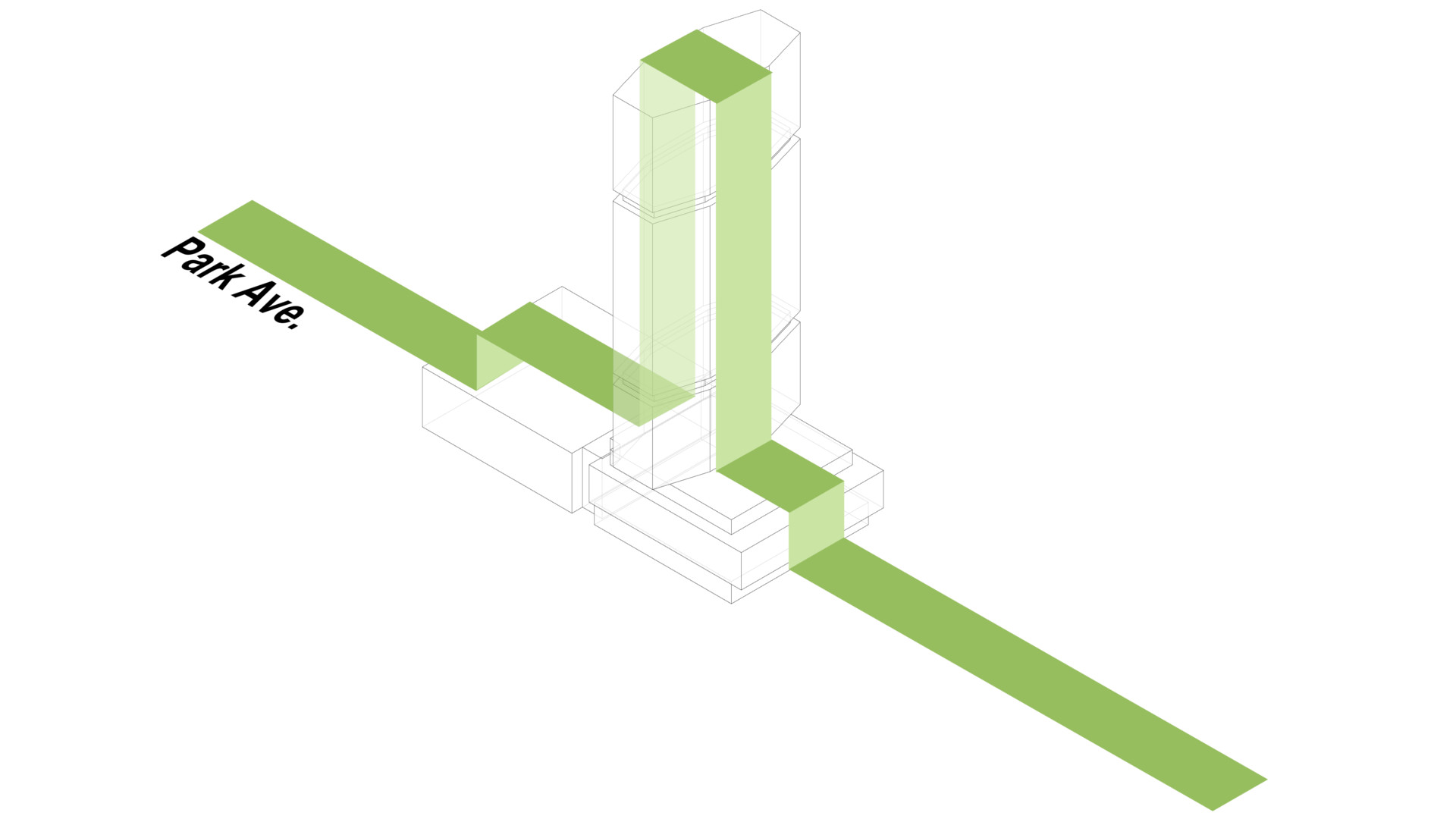 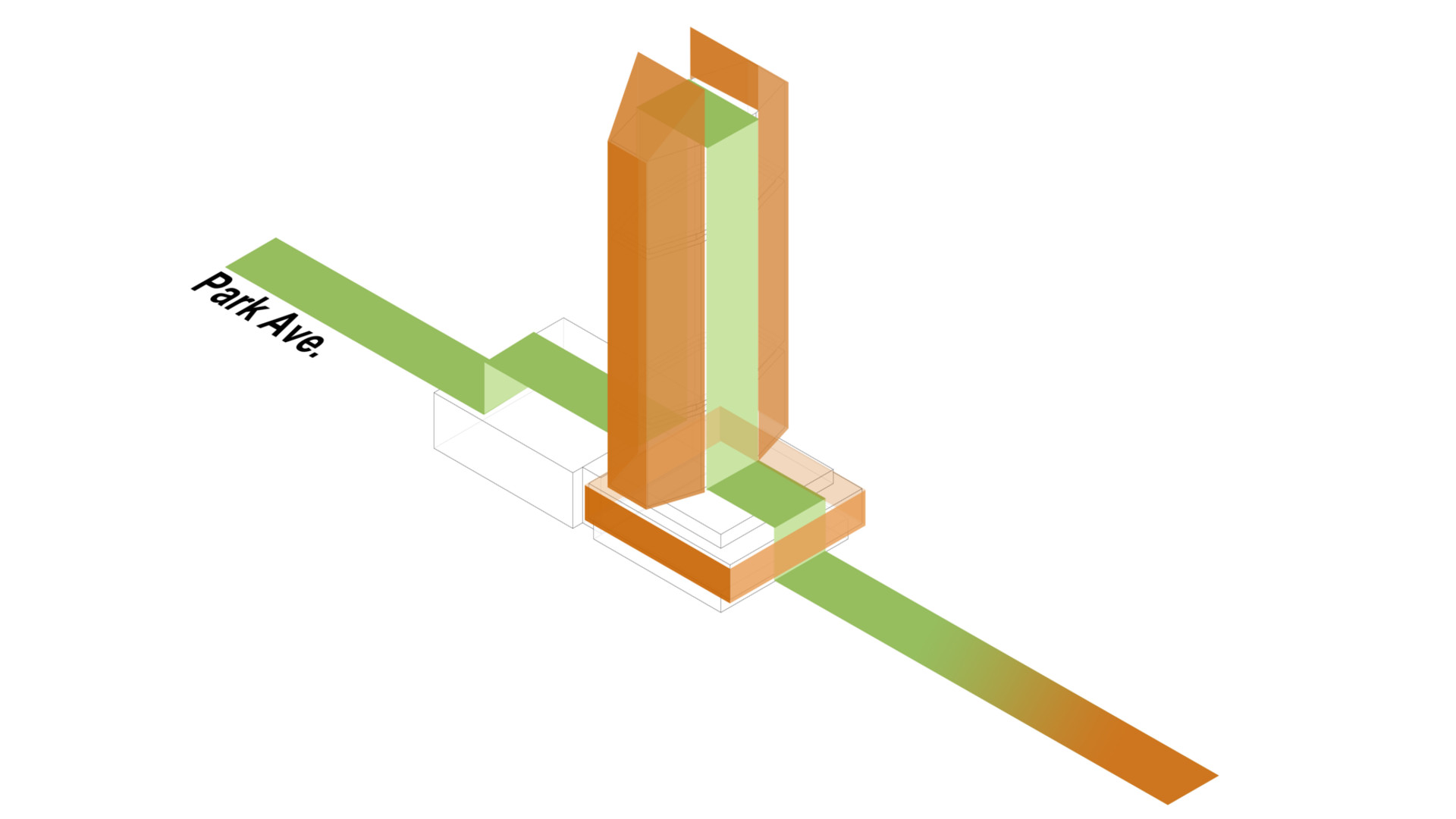 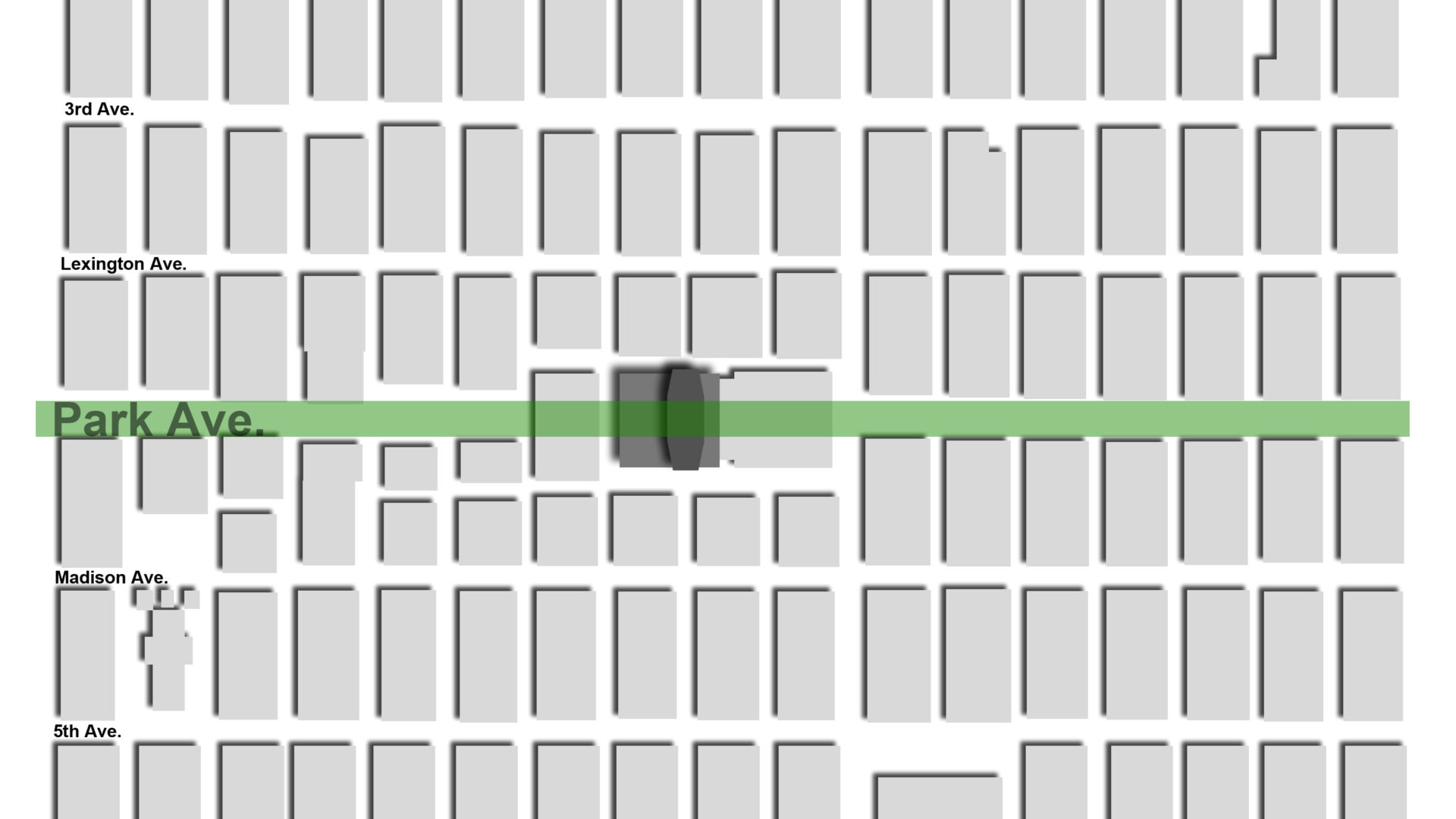 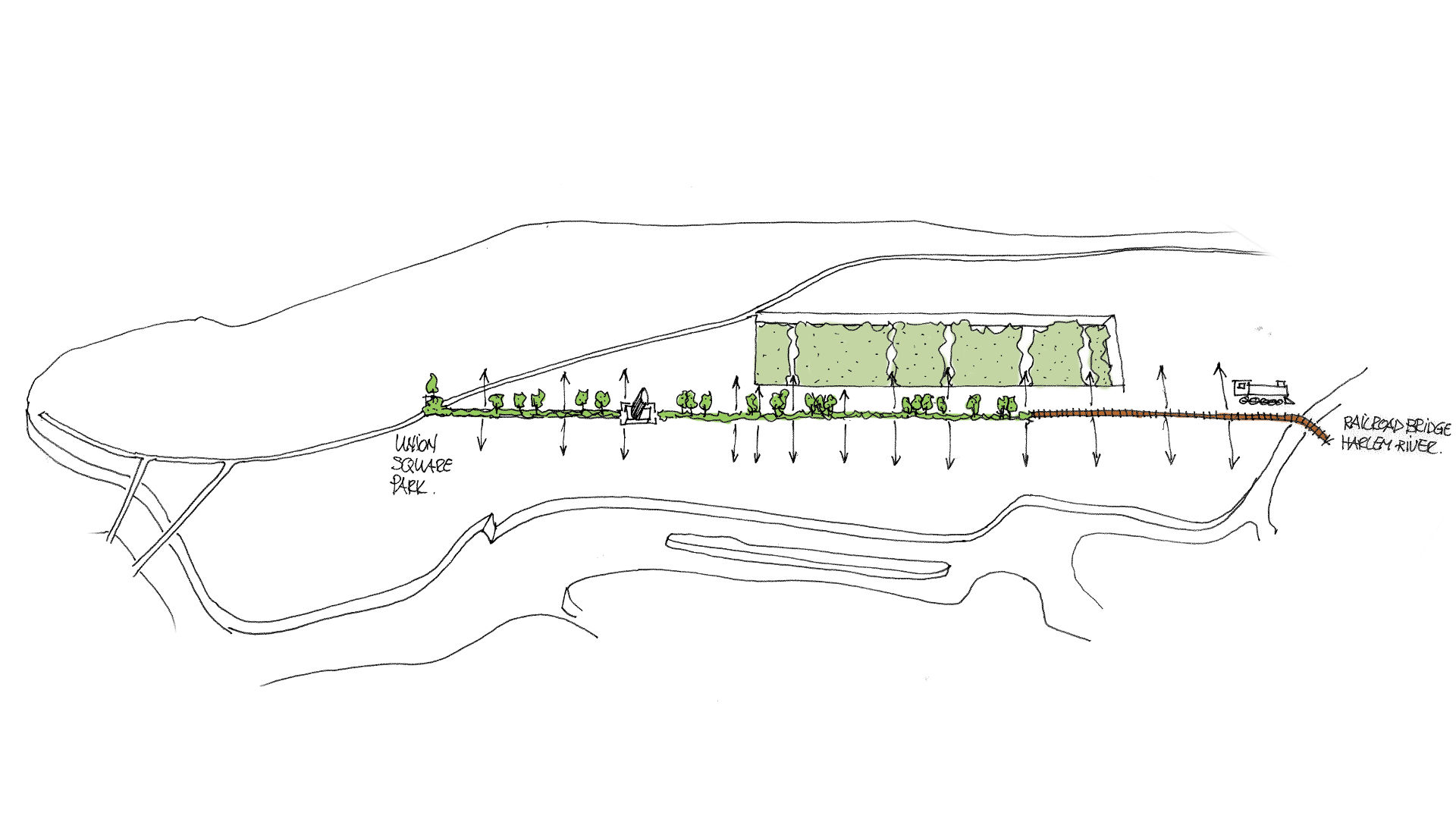 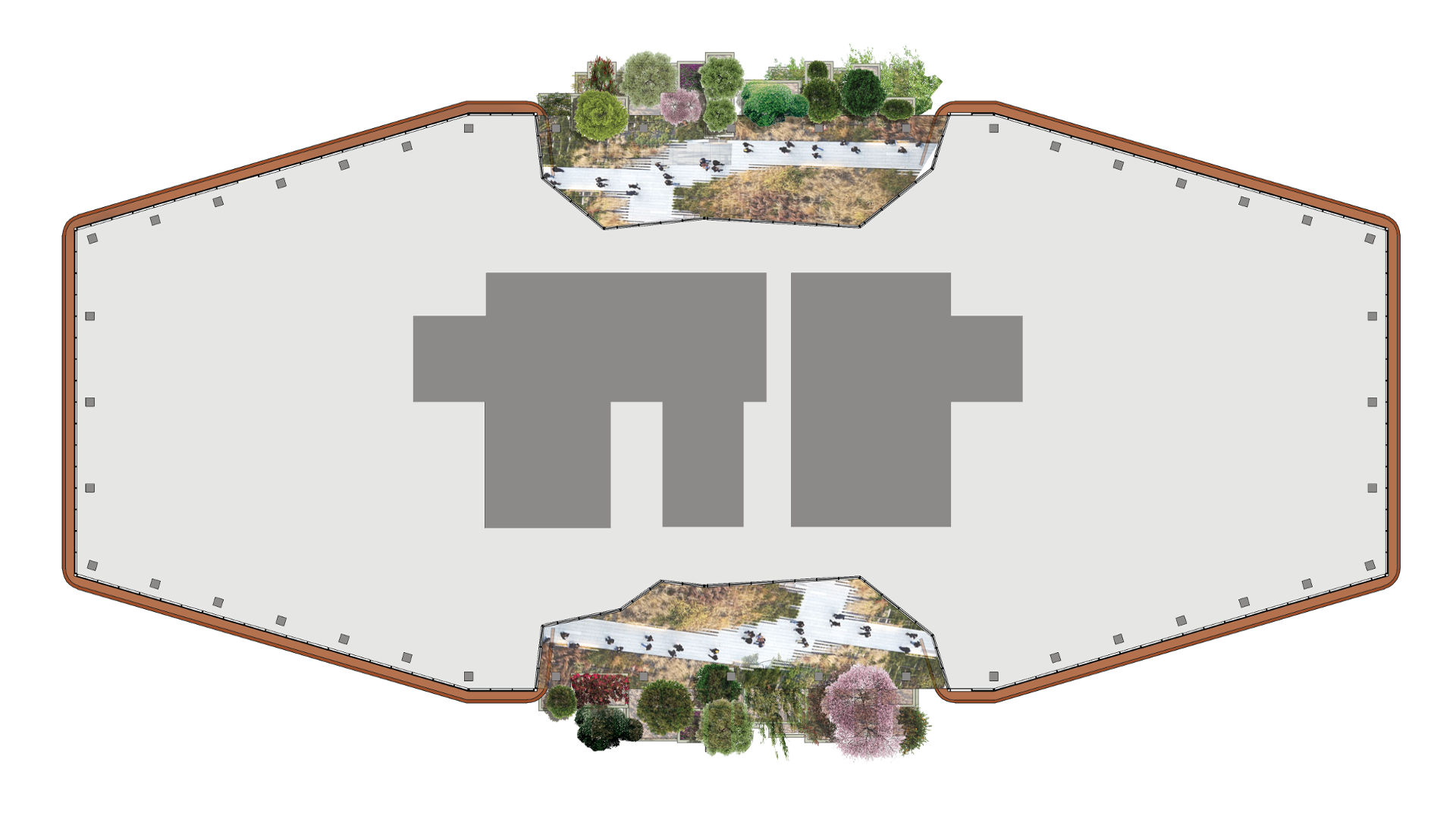 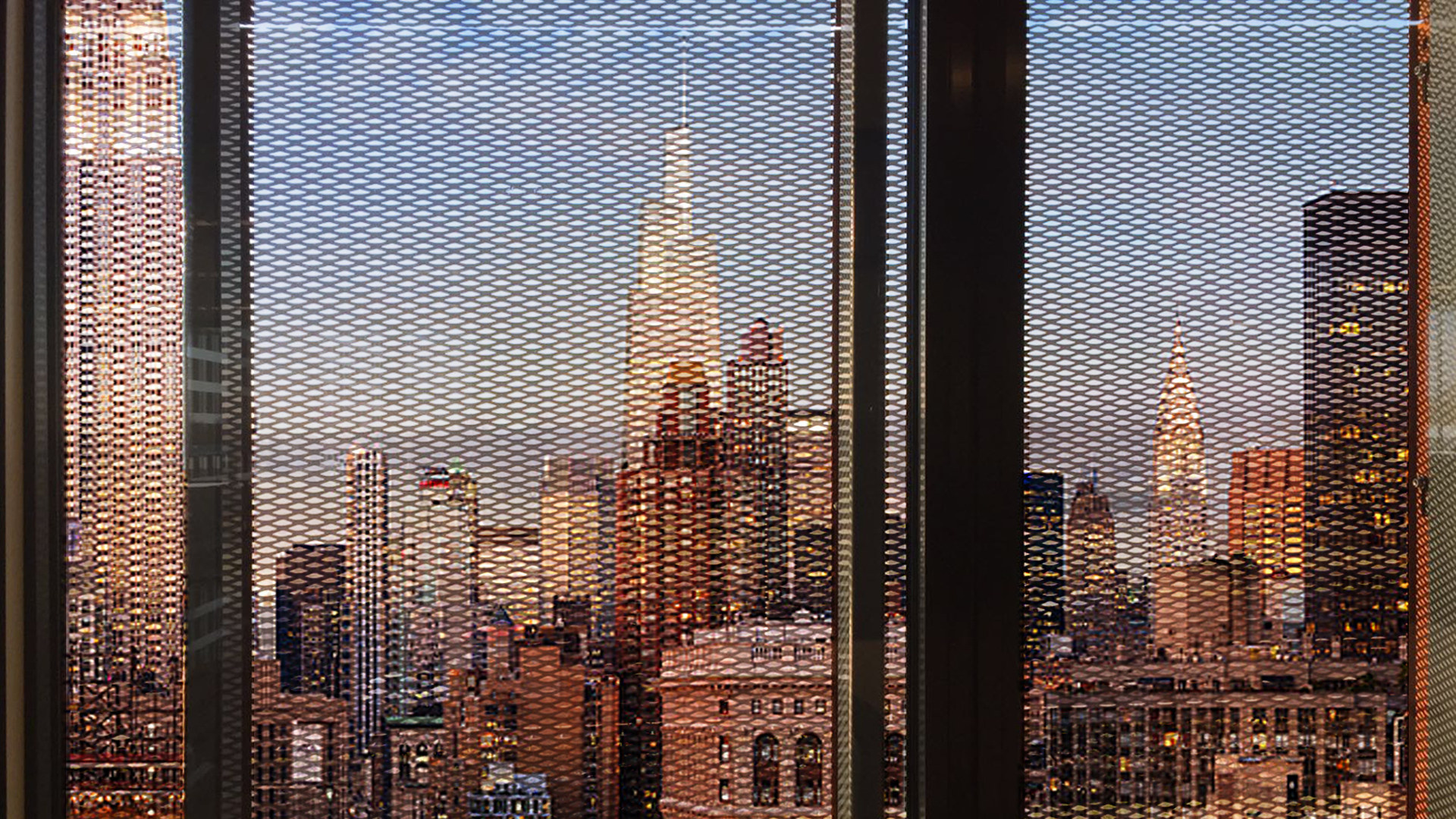 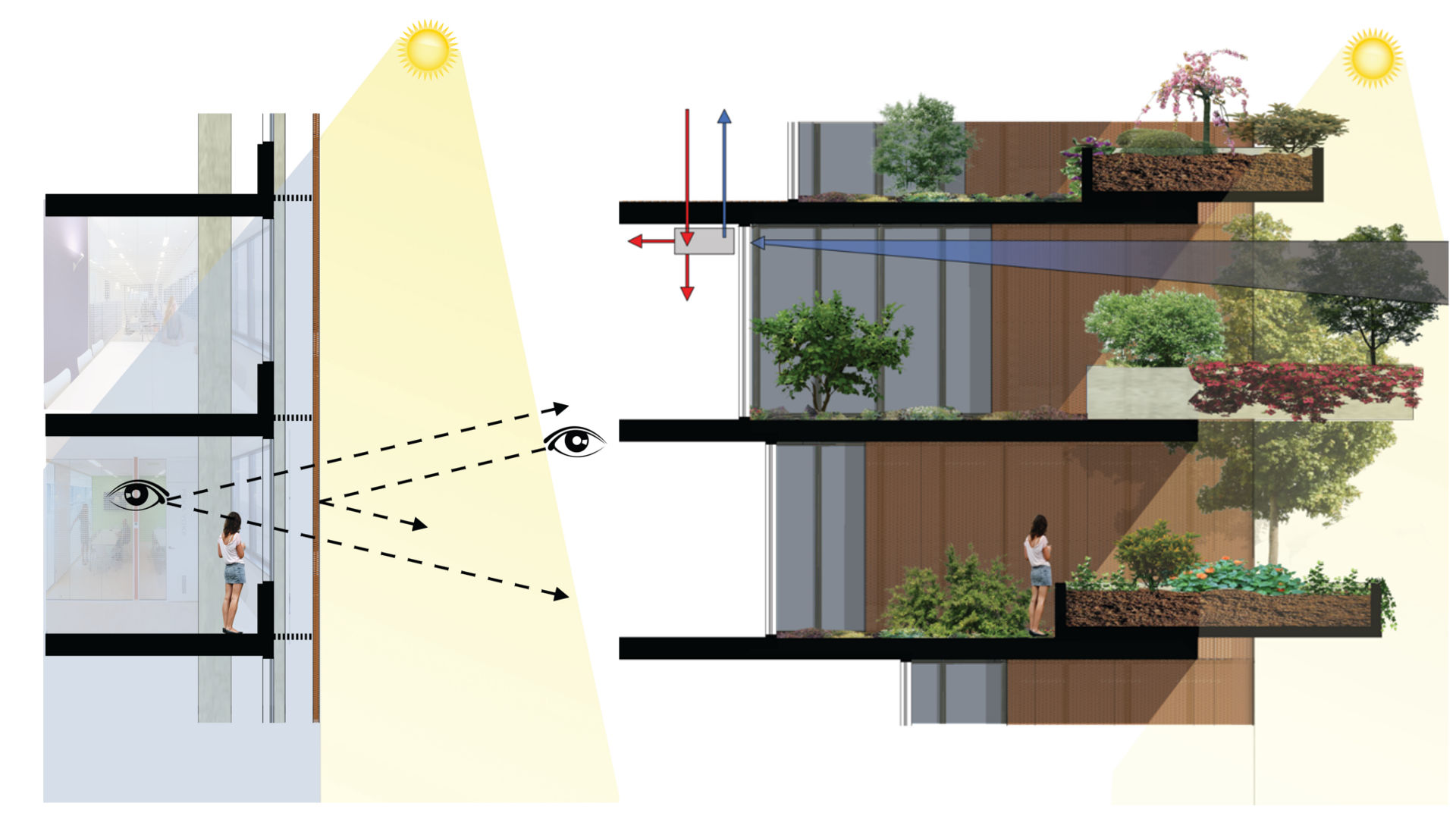