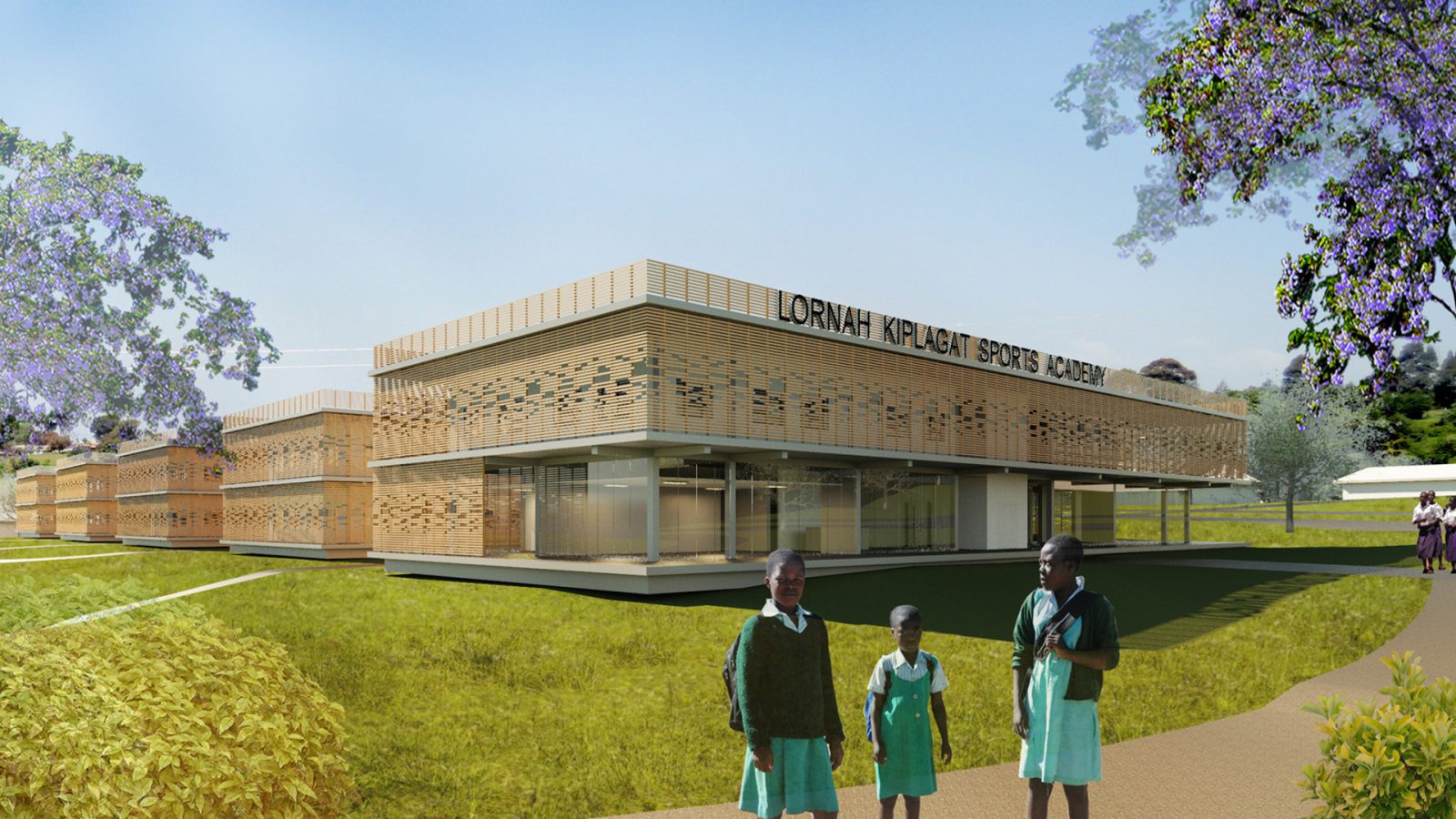 However, in the current educational situation in Kenya there is a huge gap between what children learn in high school and what is expected from them at (international) universities. The Lornah Kiplagat Sports Academy will be the bridge that takes them across this gap. They will be taught everything they need to know to go on to any university in the world; ICT, international cultures and customs, planning skills, social and communication skills and other ‘real-life’ skills.
The Lornah Kiplagat Sports Academy focuses specifically on girls from Kenya, because today’s girls are tomorrow’s mothers. They will pass onto their children what they have learned now, enabling the next generation to grow up with a new and stronger mindset. A mindset that will make for a better future. 70% of the girls selected for the Academy are currently living in underprivileged circumstances. Without the Academy they will probably never have the opportunity to study after high school. 30% of the students will be regular paying students who have the talent, the skills and the ambition to pursue an international career.

The academy lasts six to eight months. Students will not only attend classes but also participate in an intensive sports program. The Lornah Kiplagat Academy will offer hockey, volleyball, athletics and basketball. The girls will study for SAT I, SAT II and TOEFL exams, which are required for admission to American and other international universities. Combined with intensive sports they might be able to qualify for a scholarship. Girls who do not qualify may choose to attend one of Kenya’s universities or set up their own business. If so, we will work together with Moi University Business School to coach them.

Kenya’s economy depends on women. That’s not an opinion, but a proven fact accepted nationwide: The workforce becomes more diversified and it is the women who make money productive and pass on their knowledge onto their children. By educating the future women of Kenya – today’s girls – we create a new force, which will help this country take a huge step forward. A step away from poverty and towards a strong future. The Academy is expected to have a significant social impact too. It will not only attract students, but also employees, sponsors and businesses. It will become a centre that communicates and interacts with high schools, universities and companies all over the world.

The location of the Lornah Kiplagat Sports Academy is on the road connecting Iten and Eldoret, just outside the built-up area of Iten. Iten is located at an altitude of 2,400m above sea level on the edge of the Rift Valley. Due to its high location, Iten is an ideal environment for training top athletes. The environment has produced many top long-distance runners. Many athletes from all over the world come here to train at height.

The location where the Academy will be realized is on the same site as where the Lornah Kiplagat running track has now been realized. This track will be used by both the Academy and the High Altitude Training Center in Iten.

The landscape of the surroundings of Iten is slightly sloping. The building mass of the Academy is designed as simply as possible, so that it manifests itself as a mass. As a result, the mass and the naturally hilly landscape reinforce each other and thus give each other status.

Because the realization of the Academy depends on fundraising, a modular system has been devised for the structure of the Academy, which makes it easy to expand in the future. The modular units can be arranged as flexibly as possible. A modular unit of 4 classrooms consists of 2 layers. The classrooms are designed as transparent as possible, with as little facade as possible. A unit has been placed between the modular units with 2 stairways, running against each other, and toilets. Walking lanes have been placed around the classrooms so that students can easily move around or escape in an emergency. A facade of open slats will be installed around the galleries, so that the classrooms are transparent, but at the same time protected from the sun. A fall-through protection is no longer necessary. The wooden slatted facade screen works like a veil around a woman’s face. As a result, the unit is designed in a simple manner.

On the ground floor, interpretations are possible such as teachers’ rooms, offices or a canteen and a kitchen. But of course also classrooms if necessary. In Kenya the students live internally and therefore eat and sleep in or near the school. For this reason, an area of dorms positioned in a corral has been designed on the emergency side of the site. The dorms are traditional Kenyan and built of natural stone blocks. The shape and structure do not harm the environment. Housing for teaching staff has also been planned on the site. North of the running track there is room for an indoor sports hall, tennis, badminton and hockey/football. 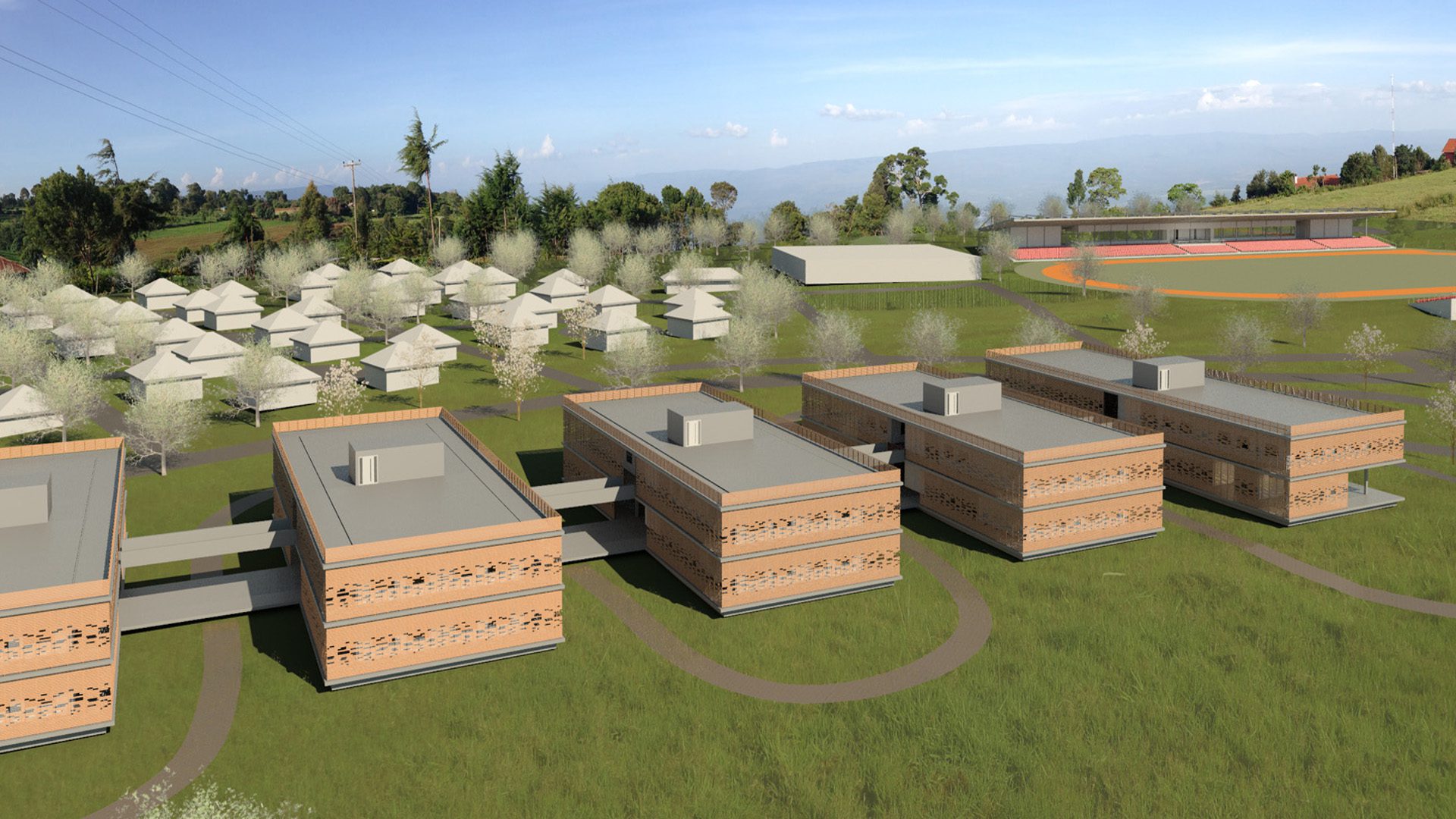 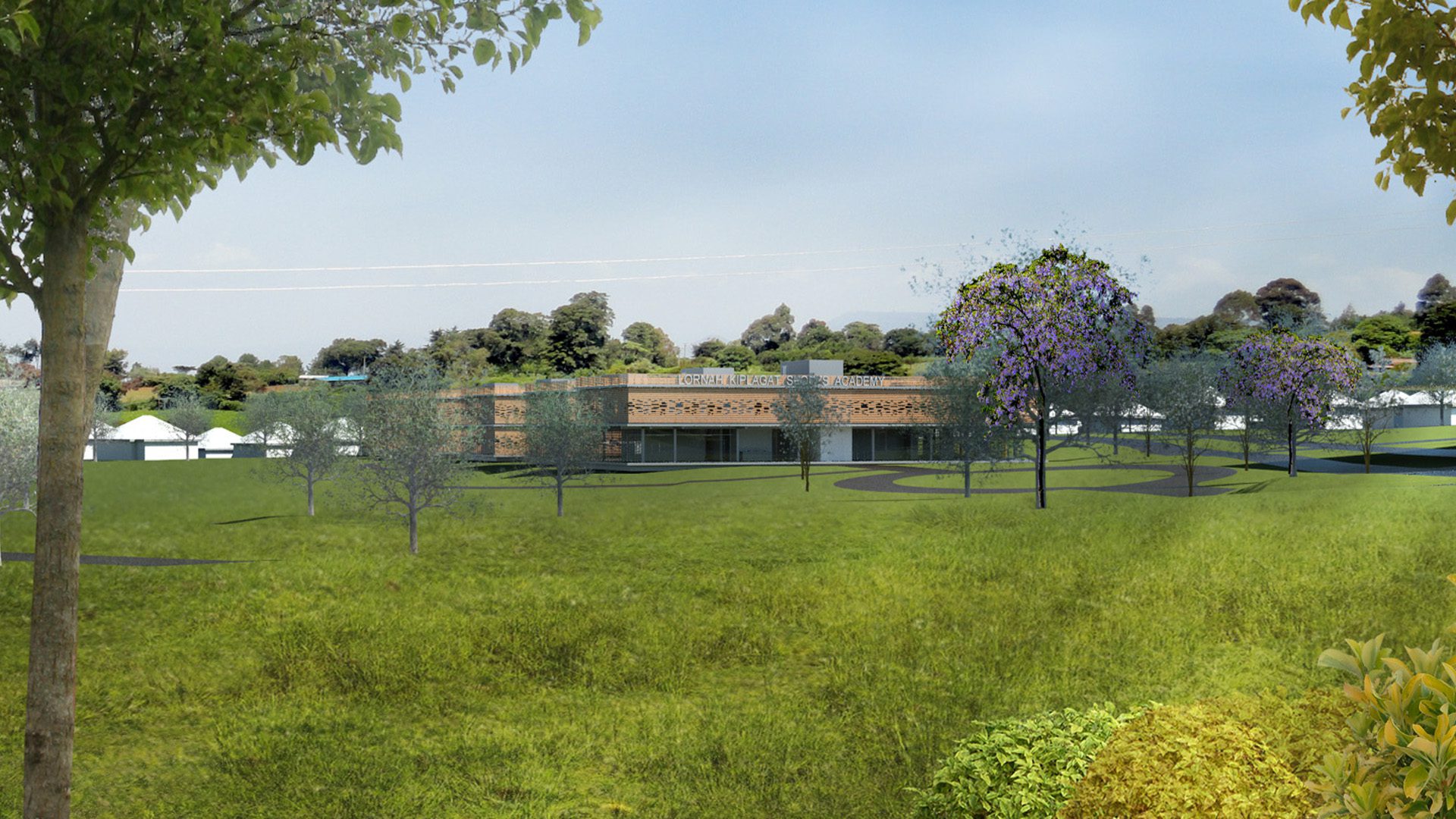 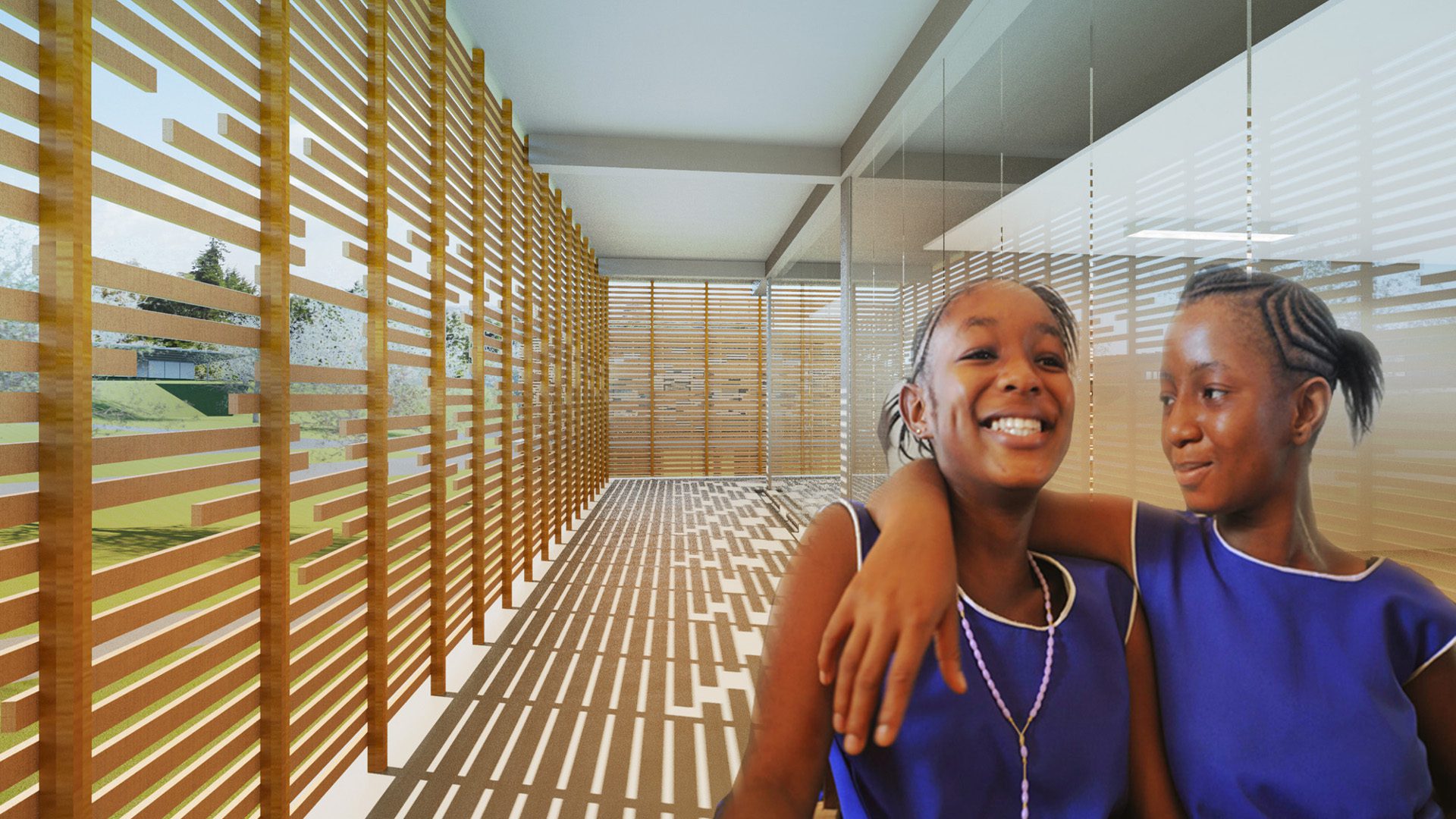 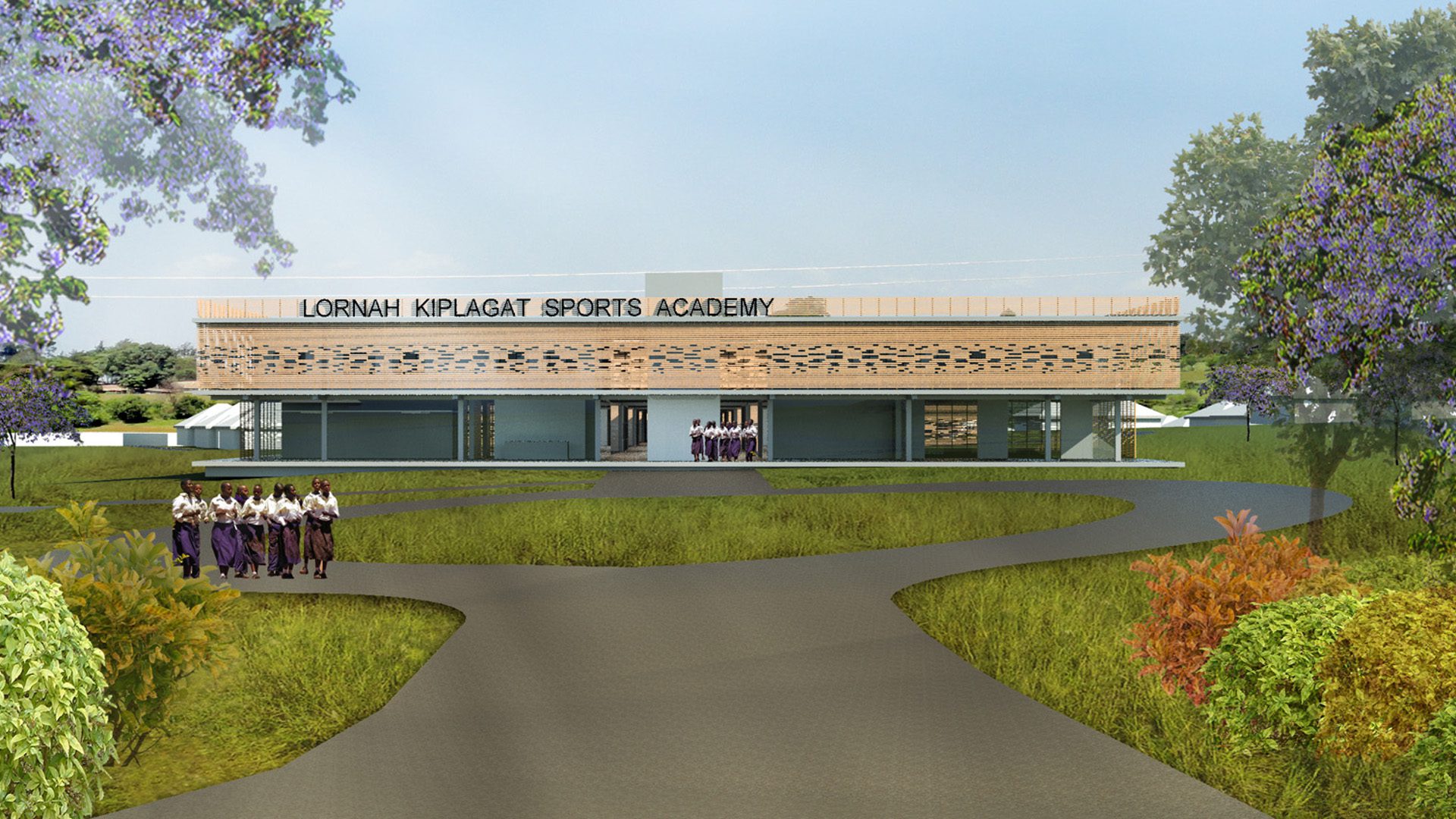 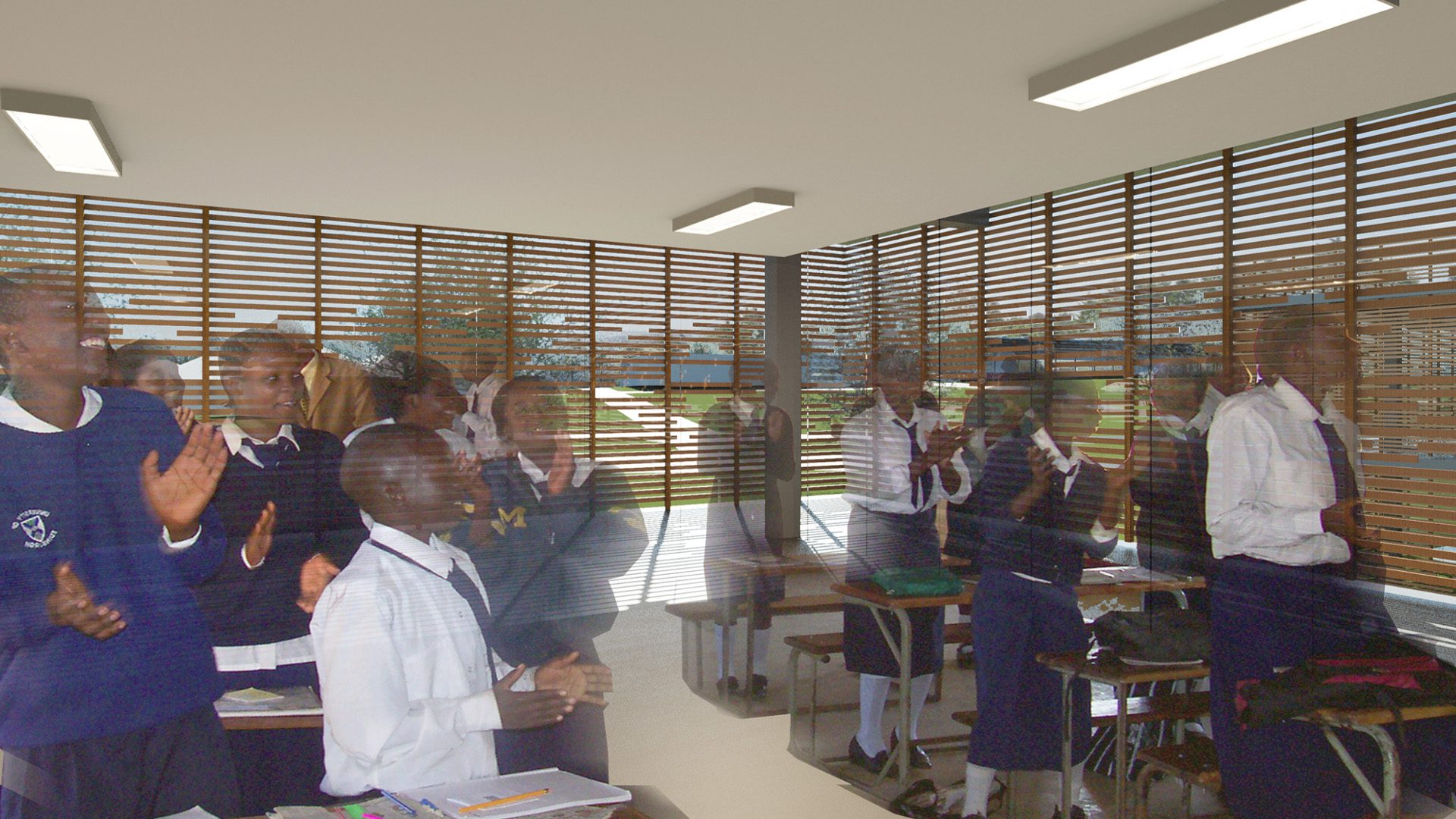 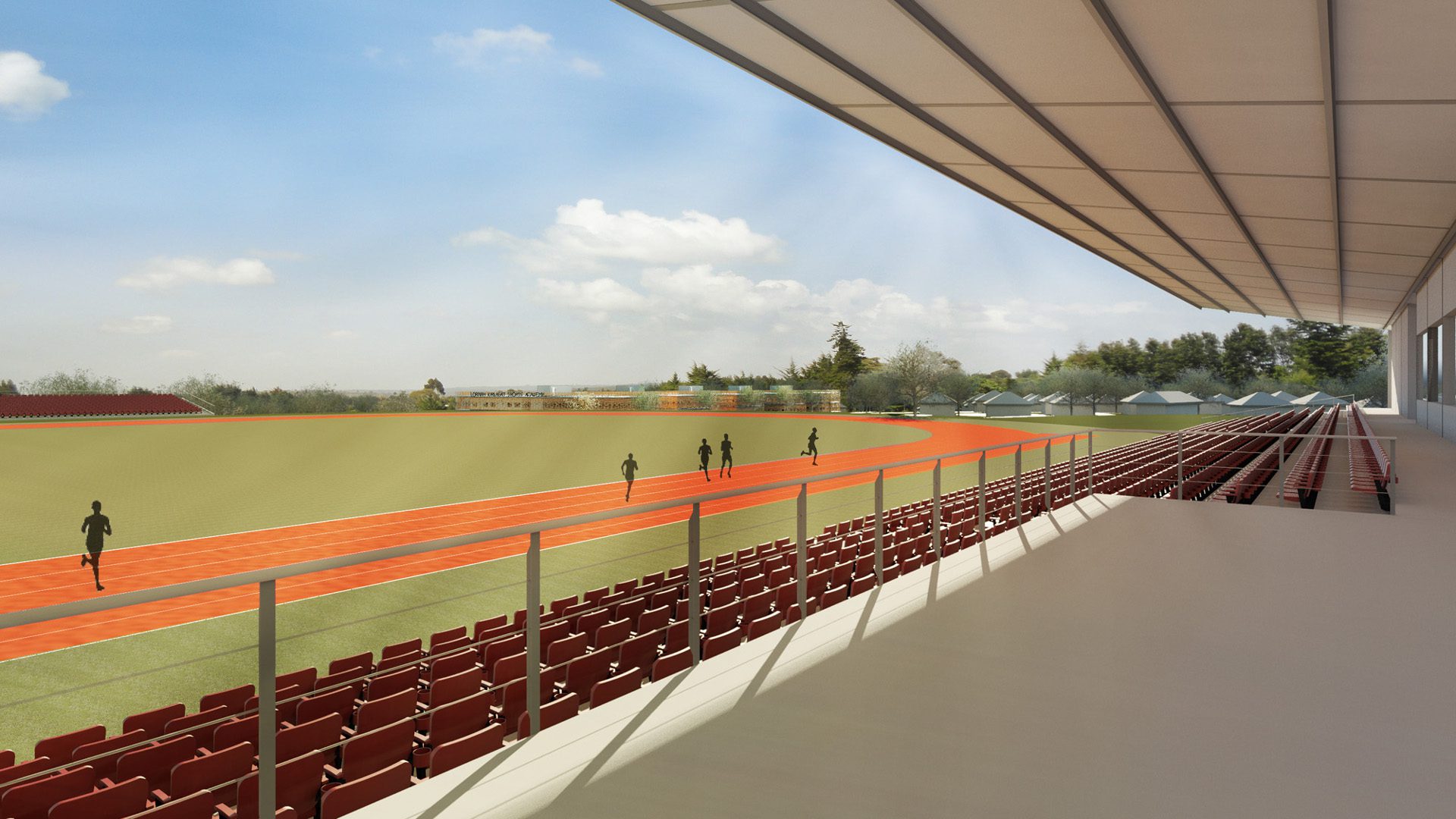 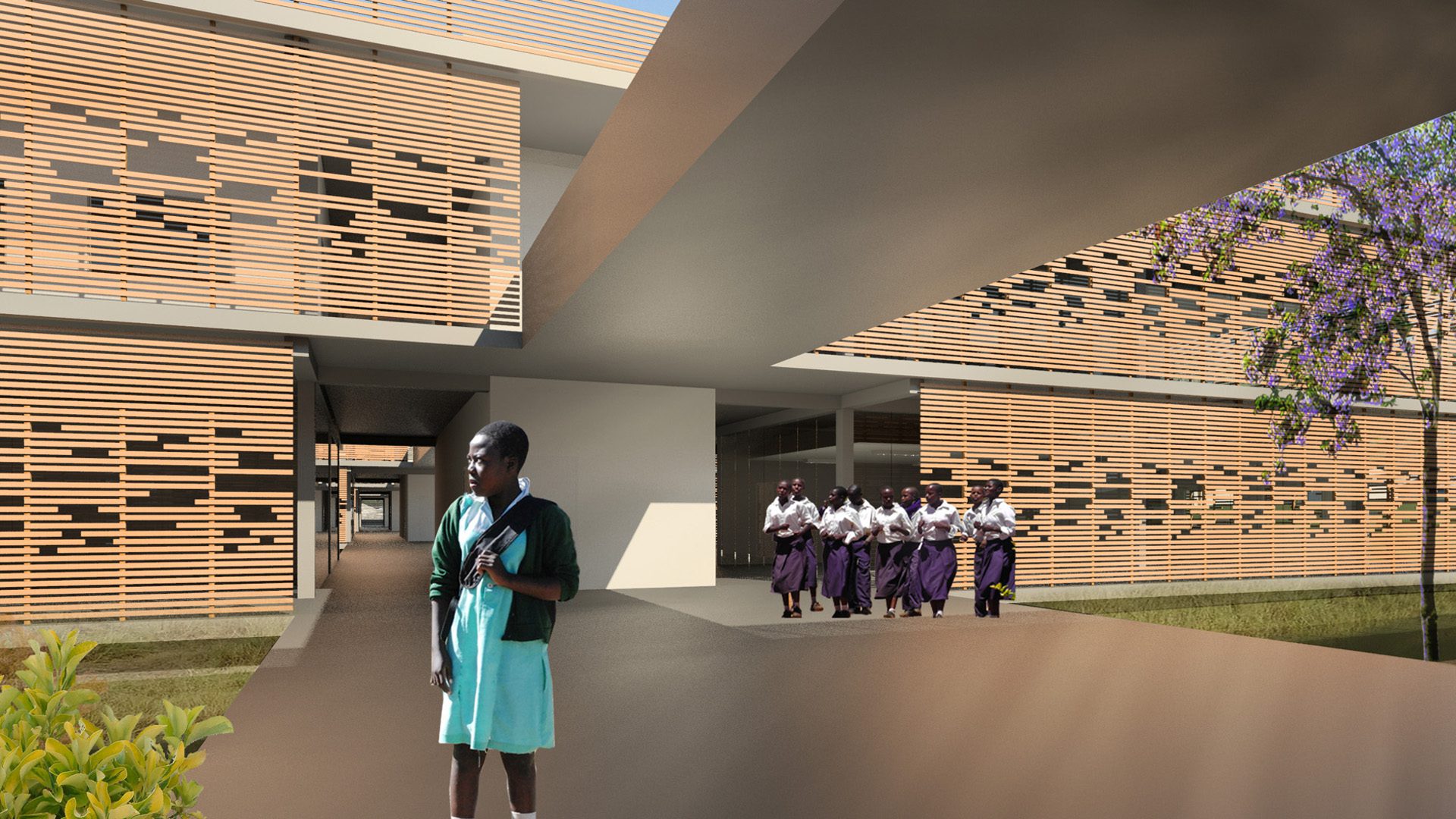 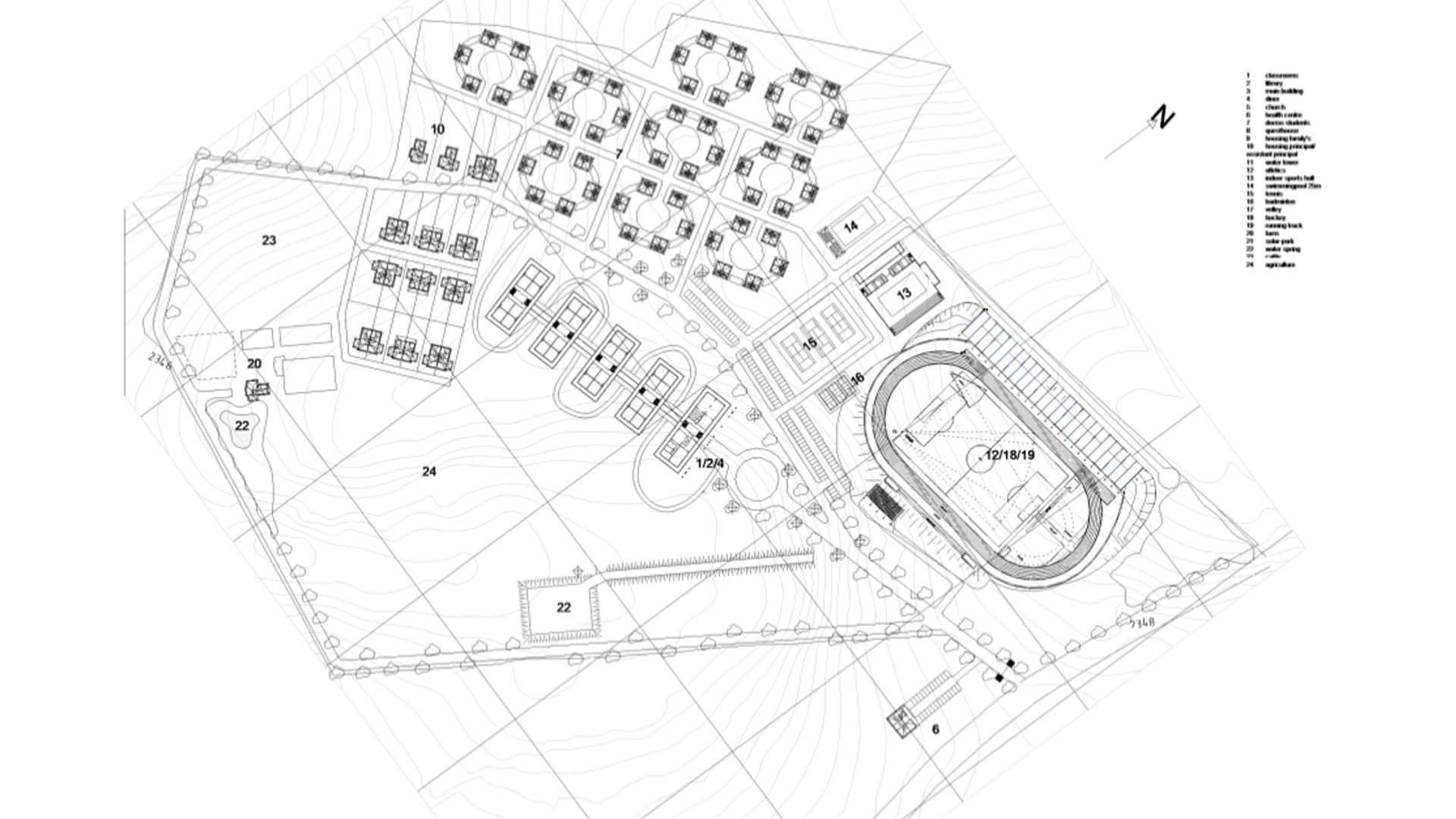 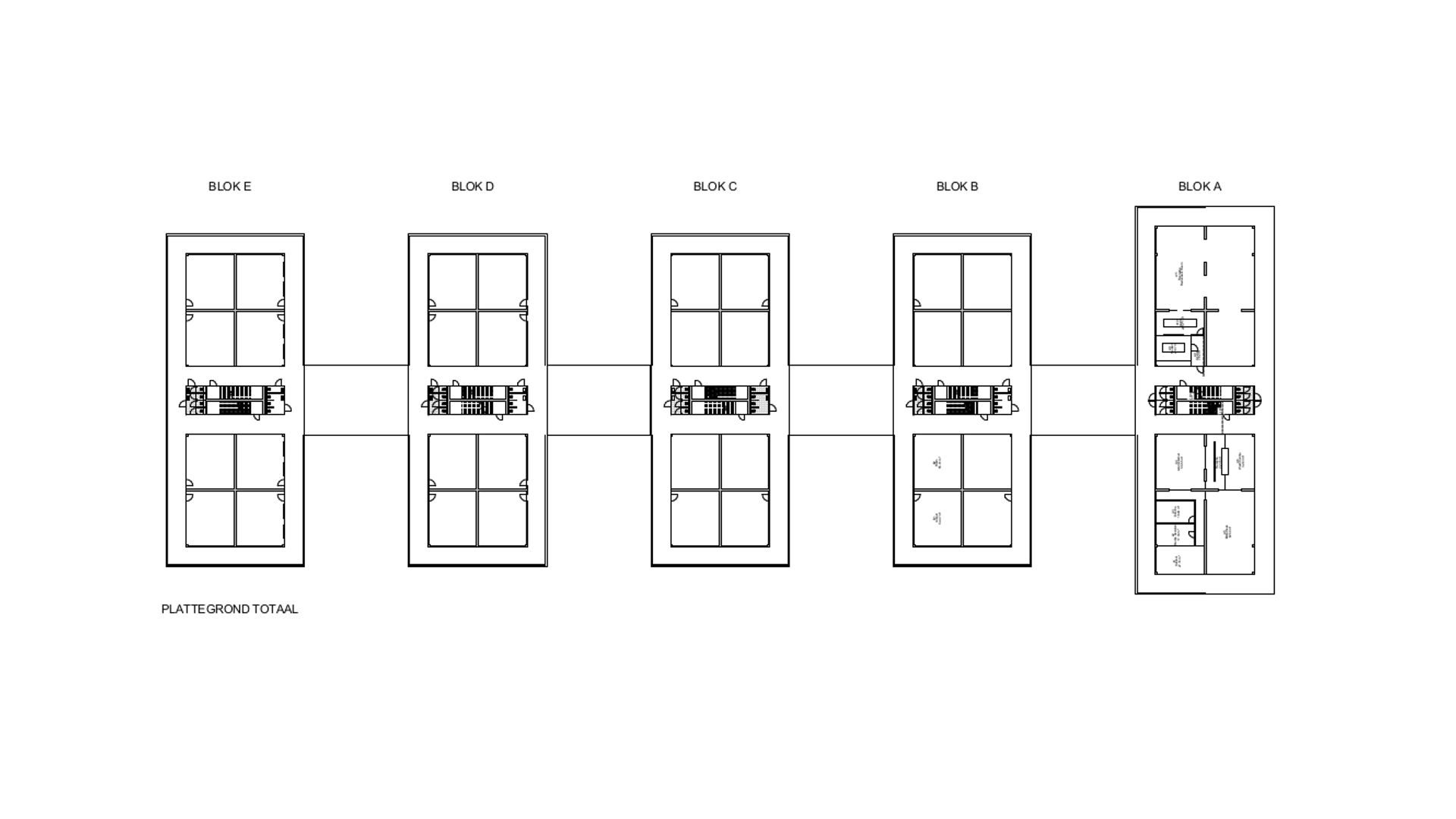 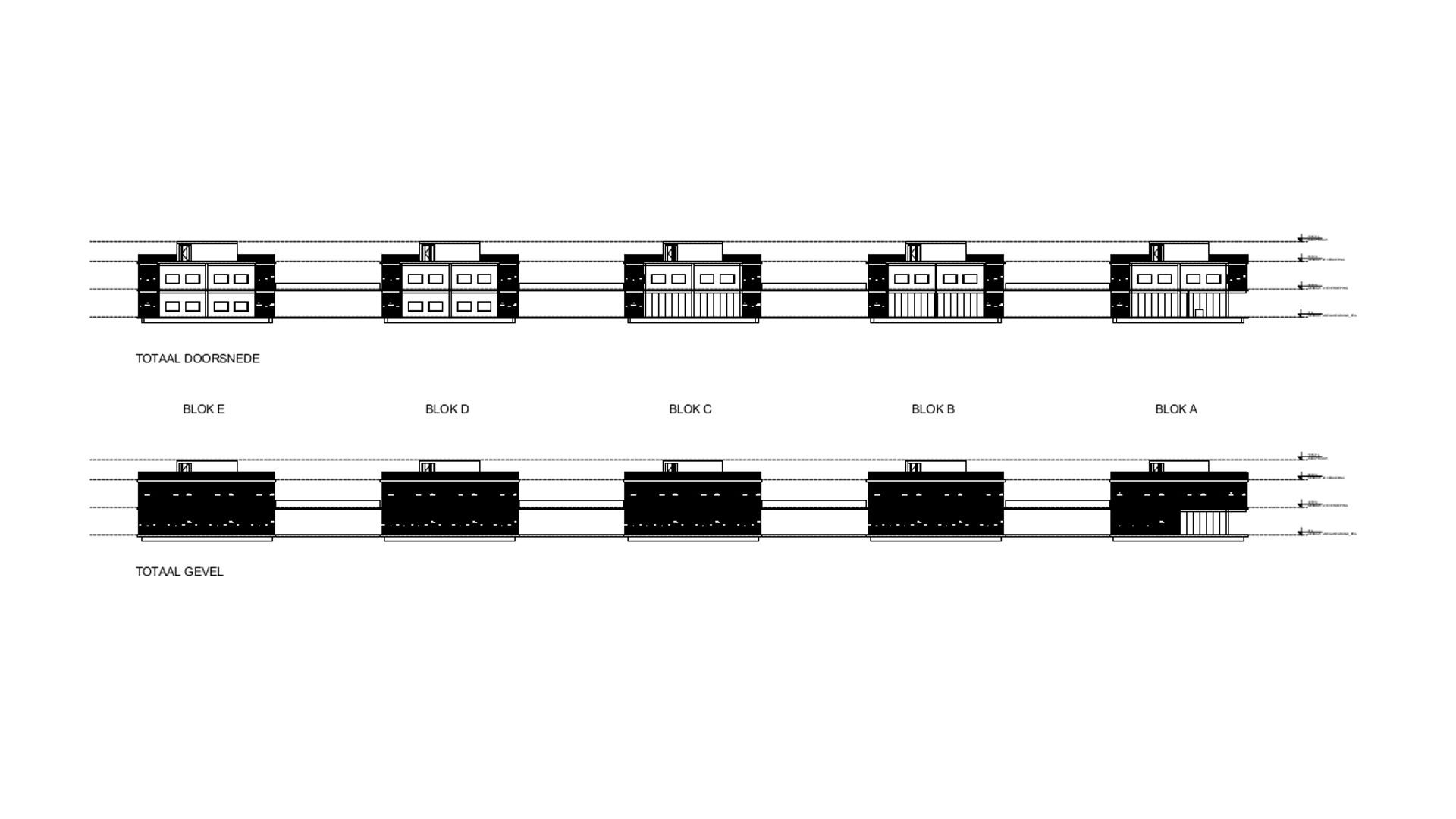